Killing Them Softly (2012) Scenes of the Crime Blogathon 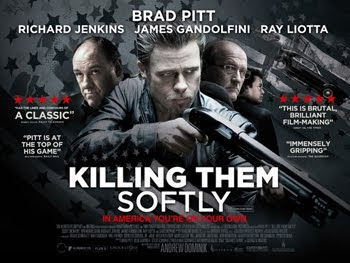 Based on a novel by George V Higgins from the 1970's this is throw back to the great crime films of that decade. Its a film about gangsters and low lifes and the terrible things

The plot of the film has a mid-level gangster deciding to rob a floating card game run by Ray Liotta. Several years before Liotta had robbed his own game and had gotten away with it throw force of personality and bravado. Its assumed that if the game was ever robbed again all attention would fall on Liotta. The robbery is pulled off by a level headed guy and his twitchy drug addicted friend...the trouble is that no one really believes Liotta would have been stupid enough to do it a second time, so the big bosses bring in a fixer, Brad Pitt, to look into the matter and kill everyone involved.

Much more talk than action (If the film bombs at the box office expect it being the result of the TV commercials promising an action film) this is good time with bad people. The film is structured in such away that we follow Pitt trying to find the guys who did it and the guys realizing that they are in trouble and they are waiting to see if they get whacked. This allows for the film's strong dialog and performances to take over. These are bad guys who like to talk and what they say is classic.

It helps that the cast is full of great actors. Ray Liotta as the guy caught in a bad place because the unthinkable happens to him is heart breaking. The beat down he gets is vicious and ugly and one of the nastiest things I've seen on screen this year. He is absolutely heartbreaking in almost every scene because he knows he's in the shit.

James Gandolfini is Oscar worthy as a hit man brought in Pitt to handle a certain loose end. I know people have raved about him for years but here he is kicking ass and taking names as a drunk hit man who is broken by the fact his wife wants to leave him. He's a scary loser that deserves Oscar gold.

Even the slightly miscast Pitt is fine as the mercenary fixer. Pitt walks through the film with a bravado becoming a guy who can do things best not talked about. If there is a flaw its that Pitt is too much of personality and he stands out a tad too much as the result of a force of will.

If there is a flaw it's the forced allegory/political message about it being all about the money, the story is about that and doesn't need the additional push.

For me the film is as good a crime film of recent vintage as I've seen in many years. 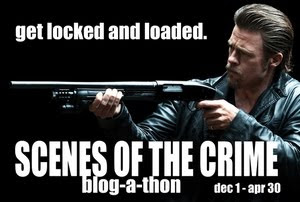 Email ThisBlogThis!Share to TwitterShare to FacebookShare to Pinterest
Labels: american, crime, scenes of the crime blogathon