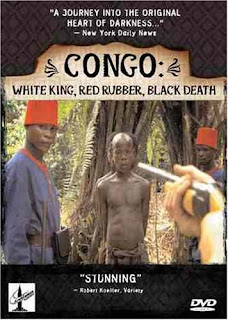 Damning indictment of King Leopold of Belgium who in a mad desire to make money for himself, not his kingdom, managed to get his hands on the Congo. At first it was a money suck but once the need for rubber came he became super wealthy. Ruling with and iron fist he practiced genocide on the population in order to squeeze as much money out of the country. Things got so bad that a call was made for him to be tried for his crimes. It didn't happen and Leopold was forced to use public relations to seem a great humanitarian instead of a genocidal megalomaniac.

This solid documentary has upset many in Belgium who see this as besmirching the beloved memory of a past monarch. For my money the crimes, even if inflated, are hard to over look. I was shocked at just how bad it was. It's a damning indictment of the madness of a time not so long ago.

For most of this films running time its a film that you fall into. You can't help but get carried away by the madness. The trouble is that the darkness of the tale is overwhelming at a certain point I started to shut off. Don't get me wrong its a great tale, its just a brutal and unhappy one and after 90 minutes you feel beaten up.