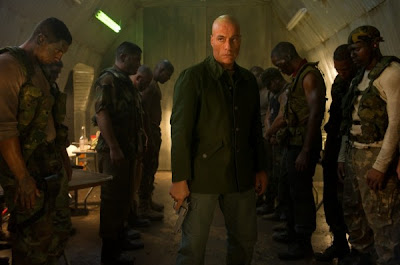 Okay- why the hell isn't this getting talked up? I knew the film was out there but it wasn't until Peter Gutierrez talked it up on Twitter that I really sat up and took notice. With an opening that is disturbing and disorienting and a sense of real danger with every violent act, people die horribly and even the good guys have terrible things happen to them, this is a kick ass horror/action/science fiction film that is one of the better films of 2012.

The plot of the film has John waking up from a coma, the result of a home invasion that has left his wife and daughter dead. As John tries to piece together what happened he runs into the now rogue Universal Soldiers who are being lead by a now Messianic like Luc Deveraux, Jean Claude Van Damme, the man who killed his family.

Mean, nasty, ugly in it's violence, the film very much reminded me of the cold distant and deeply disturbing early films of David Cronenberg. It also had tinges of Beyond the Black Rainbow and other head trip films...including one about a trip up a river in Vietnam

And that I think is the problem with the film, at least in the mind of most people who are seeing it (I believe the IMDB rating is around 5), the film is nominally set up, and marketed as a revenge story, about a man trying to find out what happened to his family, instead the film is a long trip down a rabbit hole where reality is completely questioned and the nature of the entire film series that lead up to it is called (wonderfully) into question. I know it doesn't help that top billed Jean Claude Van Damme and Dolph Lundgren have essentially supporting roles (though ones that require their force of personality for the film to work)

I really like this film. It's desire to change the rules and upset the apple cart of everything that went before impressed the hell out of me... as did the stunning action sequences and it's refuse not to shy away from the violence and it's cost.

Assuming you are willing to take the film on it's own terms I highly recommend this film.
Posted by Steve Kopian at December 30, 2012