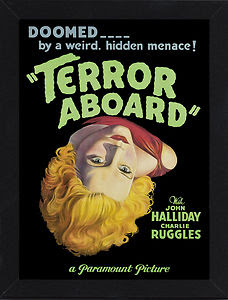 A misplaced gem from Paramount Pictures is ghoulish and decidedly pre-code...

The opening ten or fifteen minutes are some of the best horror moments you're likely to find in any early 1930's films as a large freighter is slowly making it's way through a nasty fog bank. The look out spies  a ship moving in the fog. The frieghter attempts to contact the ship to avoid collision but fails to do so.  They shadow the ship and the next day realize that something is a amiss and they send a small party over to what they now see is a super expensive yacht. When they fail to contact the one man they put aboard, the small ship docks only to find the man they sent abaord dead, and other bodies. As they invesstigate further the ship begins to burn...The film then shifts gears into a flashback tale of murder and madness which then takes events from their start through to "the present"

Small gem of a film is so good in the opening minutes that any miststeps in the remaining part of the film are forgivable. Not that the film misteps much, but I will say that the film's flaws are probably due to the film being made in the Studio System which couldn't allow the film to go as black as it would today. Trust me on this the film gets pretty dark as bodies begin to pile up and it kind of looks like for awile that goodness will not win the day.If this was made today it would probably have no survivors.

You've no doubt noticed I've not gone into detail about the main thrust of the story. That's intentional since what happens on the ship in the wake of a certain telegram being refcieved is the heart of the story and I don't want to spoil it, even if we know how it ends for some of the characters whose bodies are found hanging or laying about the ship.

A solidly good film I was shocked, yet again, that I had never run across this film since the horror overtones are so strong (its close to a modern day slasher film) that someone must have mentioned it some where, say the Forgotten Horror Series of books. Apparently not. I'm guessing the opening darkness and the graphic nature (relatively speaking) kept this out of  TV rotation. I picked it up from the collectors market rather blindly and I'm glad I did so.

Definitely one to keep an eye out for.
Posted by Steve Kopian at December 14, 2012