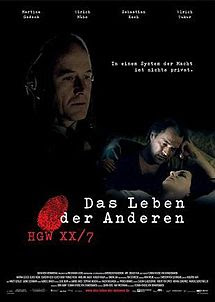 Yes it is better than Pan's Labyrinth True (?) story about an East German Stasi agent who is so good at interrogation and observation that he's brought in to observe a well known writer and director, who is in theory above suspicion. As he begins to listen to the daily life of the writer and his girlfriend he finds that his own life isn't what he thought it was.

At times cold and clinical this is movie is at once the type of movie that draws you in and keeps you at a distance. You're drawn in because you want to see whats going on, you're kept at a distance because our central figure is, at first very icy. All that changes as things go on as we, and he gets to know not only the people he's watching, but also because we, and he learns that the reasons for his watching the couple are something less than political. This is a movie that sucks you up and takes you along for the ride. If there is a flaw, its that the film, even when it warms up, still remains oddly detached.

I honestly can't argue with it's win for Best Foreign Language film at the Oscars.

A potential word of warning- this is a talky film at times. The result is that the subtitling can be a bit of a battle as too many words go by too fast. It happens three or four times in the film, as part of wordy exchanges. Its nothing damaging but you may want to see this on DVD where you an back it up and play the line again.
Posted by Steve Kopian at December 01, 2012