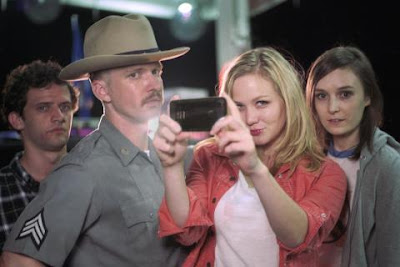 Just as I was about to descend into DOC NYC I was given the chance to see Andrew Neel's King Kelly. I accepted the invitation but deferred it until I was not in the middle of all of the documentary screenings

Give Louisa Krause extra tokens; she gives a tour de force performance as Kelly. It’s a raw and literally naked performance that is the one redeeming factor in an otherwise largely mistaken film. If I made it in to the end it was because of her.

The problem with the film is, as so they trumpet proudly, shot on I-phones. This isn't Night Fishing Park Chan-wook's intriguing experimental short film, rather this is the annoying as all hell characters film every god damn moment of everything they do sort of film.

Why did they do this?

No wait, it's not why do they do this, the characters can feel free to film everything... no the real question is why the hell don't directors and editors chop the footage down to something that makes sense? The question is why does Neel, and other directors of similar films, choose to show us so much crap?

If you think about it, unless we are stuck watching someone’s home movies or raw footage, no one shows us everything they shoot. Anyone one with any sort of brain would chop the material down so we see just what we need to see. In a conventional narrative you can show some of the extraneous material to bridge getting from place to place, but in a found footage POV style film the walking and the running other stuff makes no sense since most people would never film that, they’d shut off the camera.

A semi-aside here, the script for King Kelly actually is a good one. Some of the twists and turns would work if this was a typical narrative film, however within the context of the found footage genre they don't. If this was a conventional narrative we'd know why we are seeing what we are seeing, but in the found footage, you have to ask why are they filming ALL of this? It’s a question that is never answered. Nor are the questions of if they really shot this much of their lives wouldn't their batteries and memories run out? These are all questions that make no sense.

King Kelly doesn't have a reason why it all has to be “found footage”. Other than Kelly recording everything, there is no reason for this to be found footage. I'm trying to figure out how or why we are seeing the footage since the film makes no effort to explain it. This footage comes from where? Usually with found footage we told how this was found or at least put together, again there is no effort to explain it, this is just a film told with cell phones.

As you can tell I never could get past the story telling style. I was so bothered by the half-assed found footage nature that dominates the film I lost all patience with it. Everything after the constant filming, for the most part got lost. (I know that most of the characters, even Kelly herself, annoyed the piss out of me as a result)

Sadly I think this film probably would have been dynamite had it not been found footage. I think there is a good story here; the problem is the decision to tell this via found footage undermines everything. There is NO reason for this to be found footage, it adds nothing and subtracts from the film itself (and yes I understand that the film is this way because Kelly and friends film everything, but to me thats not enough reason)

I’m not going to say don’t see the film, some people have really liked it. For example Alec Kubas-Meyer, a friend of Unseen Films who writes for several outlets including Flixist and Indewire posted a rave review which can be found here.  My advise is simply look at some reviews and see what you think. Also think about how you feel about the found footage genre since this film is yet another in the growing line of entries in it.
Posted by Steve Kopian at November 30, 2012

Email ThisBlogThis!Share to TwitterShare to FacebookShare to Pinterest
Labels: ambivalent post, found footage, not worth the effort