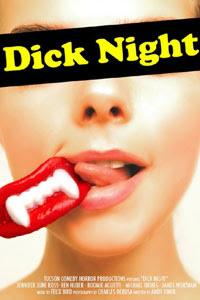 Andy Viner the director and writer of Dick Night emailed me to ask if I'd be interested in taking a look at his low budget horror/comedy or rather comedy/horror film. Intrigued by his email, I said I would.

Despite being mixed on the film in a couple of spots, I think this is a damn fine little film. It's a hell of a lot better than most of the other micro-budget films I've been running across. It's also a good deal better than many other independent  films with a budget 100 or 1000 times larger. It's good enough on every level, that unless you were told it only cost 25 grand, you'd never guess it.

The plot of the film has Rachel being rousted from her depression by her mom. She's been depressed since her fiance left her at the altar two months earlier. Mom's plan is throw her in the pool and then clean her house of the pizza boxes and other garbage that has been collecting. Giving into the advice of her best friend she decides that the best way to solve her problems is to have rebound sex... and with that complications arise as she encounters several men, who might be the one to do the deed. I'm not going to say what happens, other than what was going to be a nice quiet evening alone with a potential new room mate becomes a crowded affair that turns nasty...

Lets get the superlatives out of the way, Viner has written one hell of a film. For most of it's running time it's a spot on comedy of characters that is both funny and engaging. Viner has done the rare thing of populating his film with characters you like and care about. This is a group of people that you'd want to hang around with. The dialog, while often pithy hasn't been honed to the perfection that exists nowhere in real life. These are things real people would say. Sure it's a comedy and as such there is a certain playfulness, but at the same time it all comes across as very real.

Equally great is the cast especially June Ross as Rachel. She may not be the sexiest woman in the world but it's so easy to believe that she could have a house full of men all wanting to jump her for herself. She is proof positive that there is more to life than stunning looks. Her male co-stars are wonderful too and they sell their roles perfectly.

For me the trouble with the film comes in two places, first the music is wildly uneven.Simply put there simply are times, such as the opening "attack" where the music seems to have been stolen from a completely different film. Was the composer actually watching the film he was scoring or did he just happen to have some music he liked and used it even though it doesn't really fit the moment. What makes the missed music cues so glaring is that there are other times when the choice is spot on perfect, the riffs played as Rachel watches the car near the end of the film (forgive me I"m trying not to give anything away) are exactly right.

The other trouble with the film is the grafting on of the horror elements in the film. Yes, there are some stunning moments, the kids throwing rocks followed by the appearance of the man from the trailer is as perfect a setting up of menace as you can get, and later on as the horror sets in there are some tingling moments, but the whole twist kind of belongs in a full on horror movie and not a film that is essentially a comedy (especially when it loops back out of horror in the end.)  Personally I'd like to Viner take on a straight on horror film just to see what he can do with it.

Despite my feeling that Viner never integrates the two parts of the story, this is a super little film. Call it anything you'd like, but I think this is best viewed as calling card for a great cast and a writer/director with a great deal of talent.

Currently on VOD on cable and places like Amazon
Posted by Steve Kopian at November 02, 2012