We had done 97 minutes of an 85 minutes but none of the  story- paraphrased comment of animator talking about the state of the Thief and the Cobbler right before it was taken away from it's director. 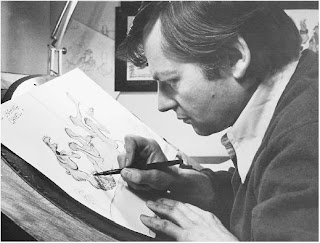 This is the story of Richard Williams failed attempt to make what he hoped would be the greatest animated film of all time The Thief and the Cobbler. The film dragged on and the film was pulled away from him only to be re-cut, reanimated and re made several times to disastrous effect.

Readers of Unseen know that we've already covered the subject a year ago when I reviewed The Thief and the Cobbler The Recobbled Cut which was a fan reconstruction of the film.(You can read that piece here). This film,Persistence of Vision,  goes into the making of the Thief in great detail thanks to interviews, art work and extensive use of the cinematic work of Richard Williams and his studio. I don't think there an aspect of the making of the film that isn't covered (though it stops once the film was pulled from Williams) .

Visually amazing, the film brings together all of these amazing pieces of animation in one place. This is animation on a scale and level that no one was doing at the time or even doing to today. Its a film that screams out to be see on the big screen.  As an animation fan I loved this film because it shows me great art and what it takes to make it.

As a non animation fan film goer I'm mixed on the film. The problem is that it's so focused on the making of The Thief that it's kind of overwhelming. There is no doubt that Persistence is a masterpiece of film on film documentary but after a while it's too much of a good thing...or too much of one thing.  I don't know if  many people are going to want see this much material on one film, especially one that they may know from the bastardized version they saw with their kids or as kids. Again it's not a bad film, it's just too much of one film.(which I will happily pick up once the film hits DVD) - on the other hand if you cut anything you would lose some of the animation and frankly it's too beautiful to get lost.

The film has a single screening Friday night at 915 at SVA and should, my reservations aside, be high on the list of anyone who love animation and thinks of it as an art form...or anyone who loves art and want to see what a great animator can bring to the table.
Posted by Steve Kopian at November 07, 2012