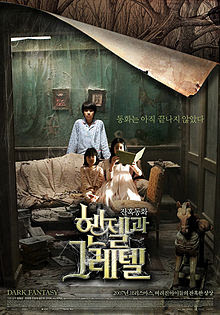 Korean fairy tale based in part on the Grimm's story only now things are reversed.

A man with a troubled life has a car accident and stumbles into the woods. found by a child he's brought home to recover with her mom, dad, sister and brother. However things transpire that quickly lead him to realize that all is not well and that he may never be able to leave.

If you suppress your desire to compare the film to other works of terror and fantasy in the early going you'll find that this is a pretty good and rather creepy story in the revised fairy tale genre. Its been compared to Pan's Labyrinth and The Orphanage and  I would say that this would make a hell of a double feature with either (and perhaps even People Under the Stairs). It is ultimately a fairy tale and not a horror movie (its very creepy and doesn't have really big scares) and on that level it scores big points.You can pretty much click off the typical fairy tale elements and see that they are all working here (and no you won't do it while you're watching-though you will be aware that this is not a typical horror film) To be certain it did remind me of other films, but at the same time it bends them to its own end. The film also has several really good characters that lift the film to a higher level. The performances are across the board excellent with any flaws the result of the writing.

I liked the film a great deal and I am both happy and unhappy that I was interrupted in my viewing by a friend because the end left me rocked in both a good way and a bad way. I can't imagine how I would have reacted had the call not come since as is I'm a tad unsettled (which should not imply anything either way since the impact was emotional I'm not sure which way it left me).

Worth a look if you get the chance and like dark fairy tale type stories.
Posted by Steve Kopian at November 17, 2012