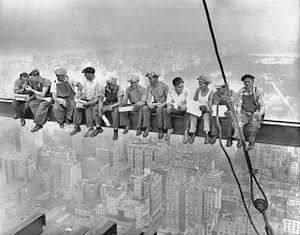 A look into the mystery of an iconic photograph (see above) which looks at not only the photograph but at New York City in history and the at the time the photo was taken.

The photo was taken in September 1932 during the construction of Rockefeller Center.It was shot by an "unknown" news photographer, however in recent years there has been some evidence that a Charles Ebbets took the picture.

While we may know who took the picture we may not know who is in it. In researching the film it was discovered that there are other photos in the Rock Center archive taken on the same day that reveal the name of at least two of the men. Research, in unexpected places, reveals the names of a few more.

This is a very good look at the photograph and it's place in history. Its a picture that has touched millions of people and is hung in almost as many homes. What I like about the film is that while its very much of a place and of a time it speaks to a larger audience. This is the story of the immigrants to America, its the story of New York, it's the story of  us.

What I also like is that the film has a plethora of images old and new that shows the passage of time. Thanks to the careful selection of image we are both then and now. Its a film that connects us to our past as few films ever manage to do.

The film plays Saturday the 10th at 730 at SVA and Wednesday the 14th at the IFC Center.

(Mr C shares his thoughts over at Planet Chocko which can be found here.)
Posted by Steve Kopian at November 09, 2012