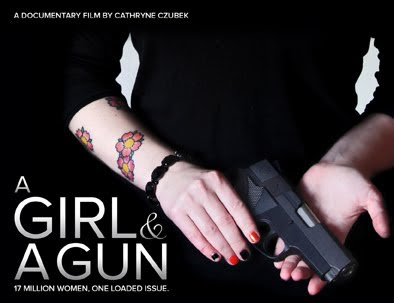 I'm glad director Cathryne Czubek said I didn't have to hold my review of her film, because you'll want to try and get tickets for the film which World Premieres tomorrow night at the IFC Center (It screens again Wednesday)

A Girl and A Gun is a look at women and guns in American society. Using the stories of several women, some who have guns for protection, others who like to shoot and adding in commentary by academics the film paints a broad, yet very complex portrait of guns and women. Its a film that strives to present all sides of the issue, something is best seen in the victims advocate working to end gun violence who's daughter was crippled by a drive by shooting and who now carries a gun herself. There are no easy answers, nor easy questions.

My over riding thought while watching the film, for what I hope was just the first time, was this is too complex an issue for a 75 minute movie. Give director Czubek credit for covering as much as she did in as short an amount of time, she manages to get your mind going in all sorts of directions at once. Rarely have any 75 minutes in a cinema felt so much like a several course meal. Everything that needs to be here and more is in the finished film. However at the same time it's clear that Czubek has so much material here and such a handle on it that I'm pretty sure this film could easily run three times as long without feeling bloated or lessened (and considering that over 500 hours of footage was shot I'd like to think it's possible that a longer version could see the light of day).

I think that one of the reasons the film works as well as it does is that what seems to be just a film about women and guns morphs very quickly into a look at the whole question of people and guns. Yes, the film is squarely focused on guns and women, but almost everything that they say in talking about guns applies to men as well, with the exception of having pink rifles marketed to them. The whole question of guns in society is perhaps best viewed through a prism other than a masculine one since it allows for us to step back and get a better view of what we are talking about.

I really like this film a great deal. It has got my mind going six ways to Sunday. I had paused writing this film up to write an email to Cathryne Czubek to not only tell her how much I liked the film but to also ask her some quick questions. I never sent the email because I'm finding that while the film has no easy answers, its raising many not so easy questions. I'm serious, I was taking notes for the review and scribbling questions for a possible interview, when I simply stopped writing and just started watching. I had no way to simply express what wanted to know or say, I just had to take it all in and hope for a second viewing down the road. If you want to know why I'm not going into details on the film it's because I simply have to process it...and because the little stories that make up the film are hard to explain simply.

The film screens tomorrow at the IFC Center and I've read it's sold out. There is a second screening Wednesday the 14th also at the IFC Center, which I think is not sold out so go get tickets
Posted by Steve Kopian at November 10, 2012