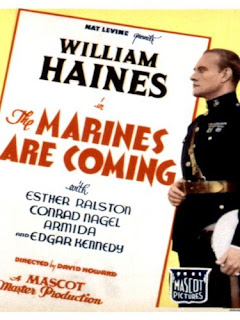 Odd mix of action and comedy never completely works, but is till worth taking a look at.

The plot has a Marine Lieutenant assigned to a base in San Diego. He is pursued by a Latin singer who is love with him. Our hero also ends up wooing the fiancé of his former rival and winning her. He ends up disgraced when a fracas in a gambling den goes wrong and resigns his commission and starts over as a private. Eventually sent to South America he ends up fighting a bandit who seeks t kill the marine contingent sent to stop him.

First half comedy gives way to second half action and the two halves don't quite come together. The cast is game and manages to sell it as best they can but the shifting gears from one genre to another never quite works. What doesn't help the proceedings is the fact that the film is trapped in the weird warp between silent and sound films that many independent films got caught in where some of the actors seem overly made up, the sound track is free of a musical score and some of the performances are a bit over done. Its not a bad film, its just not a great one.
Posted by Steve Kopian at November 24, 2012