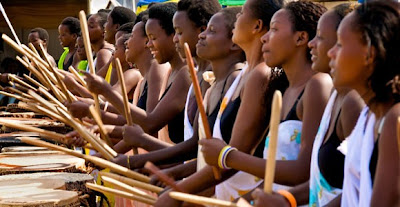 This is the story of Ingoma Nshya, the ﬁrst women's drumming troupe in Rwanda. The reason they are the first is that until Odile “Kiki” Katese put the group together no man thought that a woman could carry a drum. The group was formed in the aftermath of the Rwandan genocide and is made up of women from both sides of the civil war. The film follows the group as they play and seek to open an ice cream shop with the help of two women from Brooklyn.

I’m not going to lie, I want to take the heads of Rob and Lisa Fruchtman, the two directors of the film, and smash them together. They have all of these wonderful segments and they have assembled them in a manner that is all over the place. Watching the film I was loving the music, the drumming and the women. My heart was breaking with their stories, but how they are put together drained almost all of my interest to the point that by about 30 minutes in I was zoning out.

Why do I think this should have been a great film?

First off there is the music. Both the women drumming and the incidental music is amazing. Watching the women drum is to witness joy, Its marvelous to see such happiness that has come from such sadness.

Then we have the stories of the women. Heart breaking stories of the terrible things that happened during one of humanities darkest hour. For my money this is one of the most touching accounts of the tragedy that you’ll ever see. It not only puts a human face on what happens, but makes you feel it’s the story of a friend.

Lastly we have the story of the women trying to make money by opening an ice cream shop in their home town. It’s such a seemingly improbable story it can’t help but pull you in and drag you along.

These are three great threads that should work marvelously together but then don’t. I blame the directors who clearly know their subject so well that they don’t realize that we on the outside looking in don’t know it as well as they do.

The film starts with the drumming and it’s great. We get a little bit about the group but we don’t a lot before we’re dropped into the story of one of the women which goes on briefly before we’re dropped into the story of the ice cream for a little bit before we’re moved onto the next thing and the next thing. While admire that the filmmakers belief that we in the audience can pick things up on the fly, I have to question when they don’t give us a context to what is happening. For example we get the story of the women and the drumming, or some of it …or a piece of it… before we get the story of Kiki meeting the two women from Brooklyn… where did they meet? In Brooklyn? What was Kiki doing in Brooklyn? What was she doing to meet them? Don’t know it’s just “we met Kiki and she said she wanted to talk to us. We thought it was about importing coffee instead she was asking us about ice cream” Where did this come from? Why is this important? I don’t know.

I can accept things just being thrown at us at the start but there are times here where I had the feeling as if I was coming into a conversation in the middle. I frequently felt as though I either missed something, even as it had just started, which wasn’t possible when the film is only minutes old.

I wish this movie wasn’t finished. I wish that someone could be brought in and given the the pieces so they could reassemble then into something that connects all it together the way that it should be connected .

To be honest I had no interest in seeing this film. I didn’t care about it, but then the opportunity came to see it so I did. When the film started I I was thinking how could I not have wanted to see this wonderful film and then it started to clunk from thing to thing. My heart broke because I thought I had stumbled on something wonderful instead of just fragments.

Is this a bad film?

No. It’s a good film but it’s frustrating in that it despite the wonderful pieces it’s just not as great as it should have been.

It plays Sunday November 11 and Tuesday the 13th at the IFC Center
Posted by Steve Kopian at November 09, 2012