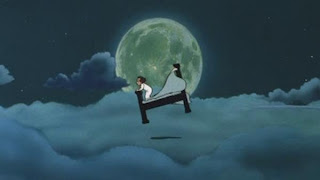 Over the past week I cleaned up the back log of reviews and set everything up at Unseen until the Chinese New Year Posts at the start of February. I even have a few thing cued to go up then. I know it sounds mad, but I really do have to keep things cued way in advance since the post a day pledge takes a great deal of work, especially if I'm raiding old reviews less and less.

In going over and straightening out a large number of posts I was struck how I'm very incosistent I am with slice of life films. I seem to like some and hate others.  Then this this week I looked at two reviews for the next wek and I realized what I like and don't like about the genre.

This Tuesday I'm going to talk about a film running as part of the Romanian series at Lincoln Center called Best Intentions. Its about how one man deals with his mother's stroke. Its a good film, but not a great film, the problem is that for all that happens I don't know why we are being shown this slice of life. The film very clearly is about something more, but despite my own best intentions I can't figure out what it is.

On the other end of the spectrum next weekend I'm going to run a short review I did a long time ago for a film called Mother And Son. This is a slice of life dealing with a son who is caring for his dying mother. Almost nothing happens but the film is so incredibly moving that I was near tears through much of it. What is the film about? Life, nothing more or less. there is something so wonderful about the small moments in the film that make it about more than just being a slice of life.

Why is that? Why do some slice of life films move me more than others?

I suspect it's because the better films are the ones with no pretention, just life. The better films simply show us life with no attempt at loading it up with meaning and bells and whistles. They are truly slices of life.

Why am I telling you this? No reason I suppose, other than perhaps to explain my reactions to two films from the same genre that are in someways very similar in basic plot.

An apology to anyone who is sick of documentaries, this week's theme is in fact more documentaries (and in a couple of weeks I'm doing it all over again). It was not my intention to program so mny of one genre so close together, but things just fell into my lap that way, first I had programmed several weeks of material over several months, but then I compressed things down and what would have been say five and six weeks apart became two.

Please don't let the documentaries turn you off, I have things counter programed such as coverage of the Romanian and Spanish film series at Lincoln Center and other events. I also have a great deal of other things planned over the next few weeks including some Eddie Constantine films, some On Further Review posts, 2012 films, horror films, animated films and other goodies. The documentaries are only a passing phase.

A full review is coming but I do want to say that I finally have seen Goro Miyazaki's From Up on Poppy Hill, the latest Studio Ghibli film. I think it's a lovely film and one of the better films from the studio. My only real reservation about the film is that because it's Ghibli it looks like every other real world Ghibli film and has no way to stand out. Definitely worth seeing when the film is released next year by GKids (The New York International Children's Film Festival people)

I will add that this isn't a film for little kids, not because there is anyhing bad in it, rather they will be bored silly

Yesterday I saw Ben Affleck's film Argo.  Not sure it's one of the best films of the year, but it is a really good one.For those who don't know it's the true story of how the CIA got six peopleout of Iran after they managed to esacpe from the embassy when it was stormed in 1979.  The best part of the film is that it wratchets up the instenity even if you know how it all comes out, which my friends, is the hallmark of a wonderful film. See it when you get a chance. (Not sure if a full review will be coming  but just see it anyway)

I should also mention a film about the film used as cover in reality called Science Fiction Land was funded through Kickstarter and is coming your way. (and yes I did back it)

I should also mention that  if you think I post about a lot of films, you should keep in mind just how many I actually watch that you never hear about . For example over the past couple of days I've seen about 12 films from Hong Kong of which you'll only hear about 3. I won't even talk about other films (You should follow me on Twitter @unseenfilms to see all I'm watching and other goodies I fail to mention here)
---

Lastly I'll end with some links

Erick Oh's Heart I saw this at this years NYAFF and it was the one of the best shorts they showed.

A bonus for one person seeing Paranorman- Harpo Marx treasures

Thats it for this week. (And do comeback tomorrow evening when I throw out a question to all of you)
Posted by Steve Kopian at November 25, 2012