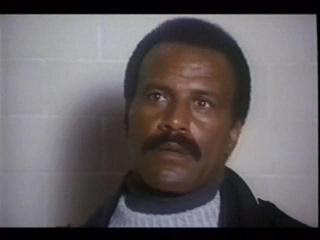 The producers of the Black Cobra series created an odd patch work film out of out takes and reused footage because star Fred Williamson didn't want anything to do with another entry in the series (I wouldn't have wanted anything to do with it either). The resulting film is marginally okay film, at least by the low standard of the Black Cobra series.

This mess is about a gang of terrorists who kidnap an electronics engineer and hold him hostage and demand he create a security system for their compound, or something (I stopped paying attention after a certain point). Williamson's Malone is brought in in order to rescue the man and take out the bad guys.

The fact that this film is "okay" when compared to other films in the series tells you just how poor the rest of the series is. Actually the new footage concerning the bad guys isn't bad and is what keeps the film watchable in a good/bad sort of way. In a weird way it's bad enough to be good and off center enough to make you want to watch it in order to figure out what is going on.

The real problem here is the Williamson material, which is just awful. Much of Williamson's performance is shots of him standing against walls not saying anything while people talk to him or taking part in really bad action sequences. It's embarrassing and had this been a real performance and not one that was put together from clips I would have withdrawn my membership from the Fred Williamson Fan Club.

In all honesty this movie is a bad movie lovers dream, for anyone else this film is going to be a trial by fire. In a weird way I can completely understand why up until recently this film never got a release in the United States (it would be a losing proposition).

Even fans of the series can skip this one.
Posted by Steve Kopian at November 21, 2012

Email ThisBlogThis!Share to TwitterShare to FacebookShare to Pinterest
Labels: american, crime, not worth the effort