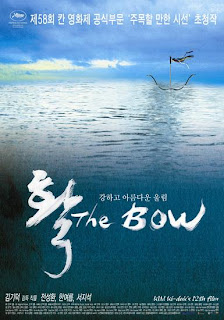 Simply put one of the most beautiful films I've ever seen. I adore the first three minutes of the film and have just watched them several times now. I adore the music and will have to see if I can run down a CD of it.

The plot concerns an old man who lives on a derelict boat in the middle of the sea. He ferries people to and from it so they can fish. Living with him is a young girl who came to the boat when she was seven. The old man intends to marry the young girl when she turns 17. All is fine until one day a young man the girls age shows up and begins to awaken her curiosity about the outside world.

Ultimately more fable than real life this is a very good film. The odd dynamic between the old man and the young girl may upset some people but it flows naturally out of the situation. Its also a film that doesn't play to expectations, so much so that when I first saw it  I felt I really had to sit down and watch the film again because there are a couple of things that happened early in the film that seem odd or out of place but are not  that way once you reach the end and I wanted to see  the film without the sense of it being off.

I've seen the film a couple of times now and I'm not sure what I make of it all, however I do know the film still haunts me and on some level colored everything I watched after that.
Posted by Steve Kopian at November 18, 2012