Some of the Conrad Brooks Jan-el Films 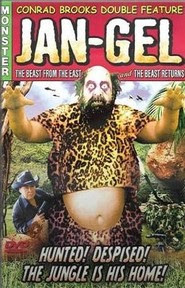 Conrad Brooks, a decent actor has turned director and made an awful movie.

Jan-el some guy in a loin cloth wakes up after years in hibernation and goes on a rampage.

I thought that this would be a low budget schlock horror film in the style of an Ed Wood movie. Instead we have a shot on camcorder home movie that is worse than watching you aunt's home movies of her trip to the cribbage world tournament in Toledo. Scenes run on and on with nothing happen. We get people walking and walking and going nowhere. You could cut this movie down to fifteen minutes and odds are you'd have a watchable short, but at a hour or so its simply torture.

No offense to Mr Brooks, but the next time someone decides to make a movie with his camcorder they should either take it away or break his hands so he can't work the controls and inflict this sort of pain on an unsuspecting world

Jan-el 2
I misplaced the review of the second film. Its awful. I'm not going to rewatch it to write it up again

Jane-el 3 Hillbilly monster
The spawn of Jan-Gel has arrived in whats the third film of the series. Thats slightly better than whats gone before, but still is pretty crappy.

The plot has the supposed offspring of Jan-Gel breaking out of a carnival and heading off into the woods of Virginia. This is the third film in a series and its easily the best and a vast improvement of the first two films (Jan-Gel Beast From The East and The Beast Returns). Here you have a sense that had the film been paced better you'd have an okay grade Z flick (I discovered this by going backward and forward through the film at high speed because I thought I had missed something in the plot, I hadn't, but I did discover this actually plays better faster)

Brooks is a limited film maker of the point and shoot variety. He uses lots of sequences that have people walking or sitting or doing something to use up tape until a reasonable amount of time has passed so he can insert the next plot point. His films are extremely cheap and you can't really blame him for doing what he can with limited resources. However you can fault him for not learning to pace things better, he's made enough films to know better. Frankly, if he's going to continue to inflict his home movies on the world he should at least make something that people can actually sit through with out nodding off.

Despite being better than the first two films I can't recommend this to anyone other than those who've seen the first two Jan-Gel films and want to see Brook's improvement, however slight, as a film maker. I say this because the person I watched this with, and who didn't see the first two films, wanted to commit me for saying this was better a film than any any other, no matter how bad. (I think the statement was "Better? Are you crazy? How could anything be worse than this...")
Posted by Steve Kopian at November 22, 2012

Email ThisBlogThis!Share to TwitterShare to FacebookShare to Pinterest
Labels: american, not worth the effort, wtf