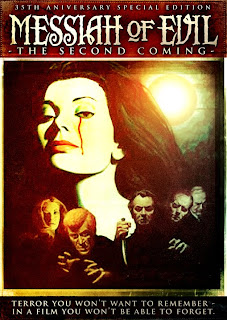 This is a creepy creepy film. Its part HP Lovecraft, part Night of the Living Dead, part Cabinet of Dr Caligari.

The plot has a woman recounting the tale of why she is in an asylum. The story begins with the woman going to find out what happened to her estranged father. They had communicated with letters, however as time went on they got stranger and stranger before stopping. Even before she arrives in the town she runs into some decidedly odd behavior, once there things get completely crazy with the dead coming back to life and all hell breaking loose.

I was hesitant to try this movie because because the people behind Howard the Duck made it, but I was pleasantly surprised, this is a scary film. Essentially the ravings of a "mad" woman this movie manages to walk the fine line between real and unreal in such away that you get sucked into her story and are left wondering at the end if its real or not. Either way I was let creeped out and had to put on a light comedy in the hopes of making it so I could go to bed. In someways I'd have to put this on the list of great forgotten horror movies of the 1970's.

It isn't perfect. The opening song is very odd choice, effective in some ways, but odd. Its suffers from a certain cheap almost amateur feel that many b-films from the period had. They take away, ever so slightly from the sense of dread especially when you've seen as many of these things as I have.

Flaws or no this is really worth seeing, preferably not when you're all alone late at night since it will leave you with a creeping sense of unease that will make bed a scary place to be.

(And yes the directors did Howard the Duck)
Posted by Steve Kopian at November 03, 2012