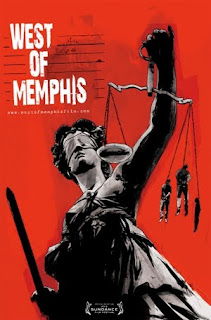 Another look at the miscarriage of justice regarding the West Memphis 3 brilliantly covers territory not covered by the Paradise Lost films and thus stakes out it's own unique place in the sun.

For those who don't know, and there were a few people at the DOCNYC screening Saturday who didn't know, the story of the West Memphis 3 is the railroading of Damien Echols, Jason Baldwin and Jessie Misskelley, into prison for the murder of three children. Picked out because "they might be the type to do a ritual killing", the trio soon found themselves behind bars in the case of Baldwin and Misskelley for life, and the the case of Echols only long enough to be executed. Supporters from around the globe began to investigate, and using the police's own files, and new evidence, began to kick huge holes in the case against the three.

After laying out the basic story West of Memphis shifts focus to the efforts to get Echols, Baldwin and Misskelley free. This is the story of Echols wife Laurie and the various people around the country and the world who continued to trumpet that something was wrong. The supporters included Peter Jackson, who produced the movie, Eddie Vetter, Henry Rollins, Johnnie Depp and  tens of thousands of regular people who kept up the pressure.

I was moved by the film.

After dispensing the basic facts that sent the 3 to prison, which is the films weakest part, the film grabs you and drags you along. Because the filmmakers were closely involved in that portion of the story the film gives us details that are nowhere else. We are inside the efforts to get the guys out in a way that the Paradise Lost films couldn't be. The film also manges to really go after the person who is now held to be the prime suspect in the killings, Terry Hobbs, the stepfather of one of the dead boys.

This is a great movie and it's two and a half hours sped by.

When the film opens in December you really should make an effort to see the film, if nothing else it may spur you to see that real justice is done.

After the screening Damien Echols, his wife Laurie, Henry Rollins and Amy Berg, the director appeared, for a Q&A.

I asked the first question which was where are the other guys now? Jason Baldwin in is Washington working toward his law degree in the hope of being able to practice law and free people like himself.  Sadly Jessie MissKelley has become reclusive and has hidden himself away in his home afraid that some one will come along and give the police reason to lock him away again.

Damien said that the film is an attempt for the 3 to control their story. He also said that with all the bad that has happened to him a great deal of good has come along including meeting his wife and people like Henry Rollins.

Henry said that when he heard what had happened and he got angry and then took action to help. It was pointed out that his steady stream of benefits helped to fund the ability to pay for things like DNA testing.

Right now the case is judicially dead and it's up to Damien, Jesse and Jason to work toward exoneration since they are technically still guilty which will effect Jason's ability to practice law.

Damien mentioned that there is a lawsuit where they are trying to get 200 pages of documents from the FBI and the WEst Memphis police which no one has ever seen. Since the case is done, they don't see the need to release it. And since the case is done no one wants to look into the fact that blood was found in Terry Hobbs's (the man now suspected of the killings) old truck or home. Also no one wants to look into Hobbs's ties to the prosecutors in the case , not the fact that Hobbs's nephew is now saying he did it.

I'm hoping the Q&A turns up since I know it was filmed, if so I will post a link.
Posted by Steve Kopian at November 12, 2012