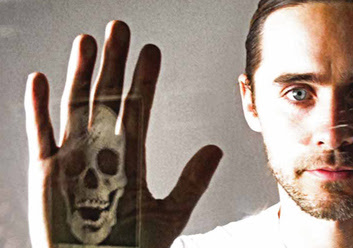 I've never seen a record company not screw an artist. Screwing the artist is in the business model- an attorney for 30 Seconds to Mars

There were two Opening Night films at DOC NYC this year. One was Venus and Serena, which I had no interest in . The other was Artifact, the story of Jared Leto's band 30 Seconds From Mars making their third album--- or would have been had they not been hit with a 30 million dollar lawsuit from EMI just as they went into the studio. Instead what we get is a film record of the band trying to create as their record company tries to litigate them into compliance with their wishes.

Before seeing the film I had no idea what 30 Seconds to Mars was, I did know who Jared Leto is and I was curious about the battle for artist rights so I bit the bullet and bought a ticket for the film (but not the gala) completely blindly.

Standing on the line to get in I realized I was in the minority. Everyone knew who the band was, even to the extent of flying in for the American premiere.

After introductory remarks by the founders and programmers for the festival, Jared Leto went on stage to talk about the making of the film and how it was a hard fought process.

Hard fought is an understatement.

Laying out how EMI tried to screw over Leto and his band the film is a cautionary tale for anyone who wants to make it big in the music industry. If you think you're going to hit pay dirt and live the high life, forget it, all the deals are stacked against you and even if you think you've made millions you're probably going to owe the record company twice that. Sadly things are even worse now with the record company wanting you to sign over a piece of everything like merchandising and tour revenue in god awful 360 deals. A great many people are interviewed who tell us flat out its a rigged game.

At the same time the film is a portrait of a rock group making a record and we watch as the new album comes together. Its a wonderful thing to see since we get to know the members of the band and hear how their music comes together. (I'm going to pick up the album soon)

As a film it's very good. Its a troubling look at how creativity is strangled and slowly killed by degrees by big business. Its a wonderful look at what a band goes through to make an album. Its also a look at how one deals when one has an insane lawsuit thrown at them. But thats the trouble with the film is it's really three  films put together, two are great, one is good.

The great ones are the band makes an album film and the primer on recording industry. The good one is the band gets sued story. Yes I know the law suit is the backbone of the film, but at the same time about an hour into the film I was growing very tired of Jared Leto saying the same things over and over again about the law suit. Not a great deal happens other than they try to make a deal - or rather their attorneys do and they weigh in by saying "what do do? Lets fight".

On the other hand the band pulling the album together story and the whole explanation of the record industry  is so good one kind of wishes both had their own two hour films to really stretch out. Actually the history of record company rip offs is so good that anyone ever thinking about recording an album should see this film before they sign any contract. Anyone who signs a contract after seeing this should be locked away for their own good.

Over all the film is a really good one, one that approaches true greatness in the final moments when talk about how how having five million people hear what you do means you've touched five million lives.The cut that follows, placing us on stage with the band as the audience goes crazy is one of the most transcendent moments of the year.Why make music? Why fight the record company? For the chance to make people go happily crazy for a moment or two...

The film is definitely worth seeing when the film gets a release down the road (the DOC NYC screenings are done). Its a film I look forward to seeing several more times down the road because not only does the music touch my heart, the weird notions of raping our artists has made me think.

A must see for anyone who does anything in the arts.
Posted by Steve Kopian at November 10, 2012