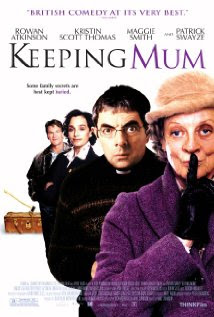 Rowan Atkinson is a "straight" role? And damn if he isn't good.
The plot concerns vicar Rowan and Kristin Scott Thomas who are trying to get along with their lives in a tiny english village. Life for Thomas has gone south, her daughter is a nympho , her son..., and her relationship with her husband is in the toilet. Its dullsville all around. Just as she begins to think of taking up with a slimey golf pro, a new housekeeper turns up. The house keeper of course is a sweet old lady played by Maggie Smith, who went away for the double murder of her husband and his lover. In quick fashion she sets about fixing everything wrong in the families life. This is a sweet black comedy the likes of which they don't make any more. A bit too low key and predictable to be truly great, this is an enjoyable romp for people who like poison in their coffee. Absolutely worth seeing in the right mood, you'll come away liking it, though maybe not loving it. Still it is so much fun to watch people actually act. 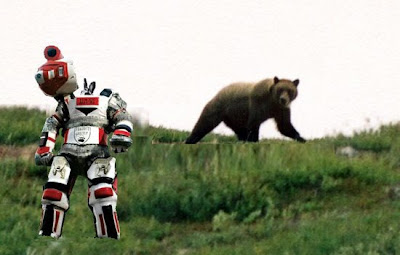 The story of a man and his quest to build a grizzly proof suit.
People are strange. After surviving an encounter with a grizzly bear a guy named Troy decides he's going to build a suit to help him get up close to grizzly bears (Maybe if timothy treadwell had known this guy he wouldn't have become lunch). This is 70 minute film where not much happens Troy talks, we see suit tests and Troy takes the suit into the wilderness for a test run . Its very zen. Its also very funny at times. I don't know if its as great as Tarantino or Penn and Teller seem to think (they're quoted on the case) but its an interesting way to spend 72 minutes. Granted it flails about so that at times its hysterical and riveting while at at other times you just wish something would happen, but it remains interesting for t least that first viewing. If you get the chance and want to see a weird companion piece to Grizzly Man, give this a shot 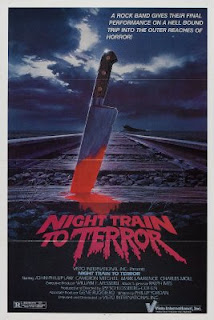 God and the Devil riding on the Galaxy Express 999 (no really, really) discuss the fate of various people while a really bad 1980's Loverboy rip off band dance and sing in another car. The music is so bad I almost turned it off right there, but I didn't. The bulk of the film is actually three stories. The first cut from an unfinished (though supposedly there are complete versions floating around) feature about a husband who kills his wife and then ends up in strange asylum where people are kidnapped and sold for body parts. It makes little sense. The second story is a version of the suicide club (and may have appeared elsewhere). The third film is a different edit of a film that actually was part of another movie. It concerns people looking to stop a seemingly ever young Nazi. Bad hair band aside, this is an okay movie, especially if you like good effects and monsters. The stop motion is clearly stop motion but it really looks cool. I liked the pieces more than the whole, but I did like it.
Posted by Steve Kopian at November 14, 2012