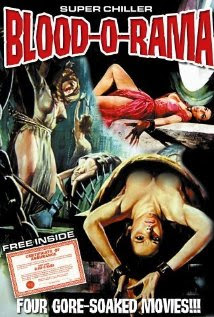 Scream bloody laughter, or some such nonsense.

So bad its funny classic about a boy who runs his father over with a bull dozer. When he jumps off the machine it runs his arm over. The crippled boy goes away to the looney bin only to come back on the day his mother remarries. Having thought he'd have mom all alone to himself he sets off and kills his step dad. When mom objects he kills her too. He then heads off on the road where he continues to kill and be haunted by his dead mother. He meets up with an female artist and then things turn weird.

What can I say, this is a gory mess that's jaw droppingly awful. The performances are poor, the plot cock eyed, and amazingly its very similar to a movie made a year or two earlier with the exact same name. This is a movie to stare at in wide wonder, or better yet a movie to rip apart with a bunch of friends.

If you love bad movies seek this puppy out

(FYI- This film has numerous alternate titles so beware)
Posted by Steve Kopian at November 20, 2012