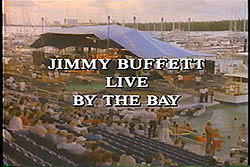 I am a parrothead.

I have seen Jimmy Buffett in concert more times than anyone else. While I have slackened off going to his concerts I still love much of his music. (And if you must know why I don't go to the concerts it’s purely because it’s become artificial and by rote. It all seems like it’s more about generating product to make the next million rather than not being a trained audio animatronic chimpanzee as Buffett walks through the performances, reading everything off Teleprompters to perform exactly the same concert night after night as can be heard by listening to their broadcasts on Radio Margaritaville)

Current reservations and disappointments aside, there was once the good old days. Long ago and far away going to a Buffett concert was an event where anything could happen and there was a real sense of real wonder instead of a processed cheese sort of thing.

Live by the Bay was made back at the peak of the fun days in Margaritaville. Filmed Miami's Marine Stadium which close to the water we get to watch as Buffett, his band and his fans (some in the water) sing dance and have a grand old time. It’s a perfect representation of what sort of a party Buffett’s concerts can be. While not high tech and flashy the film does what it has to do in order to make us feel like we are there with the crowd. Granted there is no splashing of water from the bay, but I suppose you can just mist yourself with a spray bottle.

The set list, which at the time had a good number of “new” songs, now seems like a greatest hits package. I don’t think I’ve seen or heard a Buffett concert from the last 10 or 15 years that has had a set list that wasn’t created using most of the songs performed here (Ragtop Day being a noticeable exception). As I said this is exactly what a Jimmy Concert frequently is.

How much? Years ago I ripped the audio onto an audio tape and played that in steady rotation with the rest of his albums.

Is it a great film? Hell no, but it is a fun party sort of one.