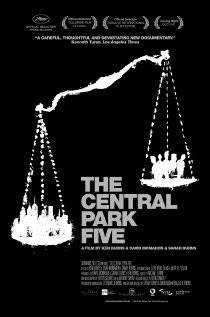 This was a proxy war...truth and justice were never part of it - Jim Dwyer New York Times

The closing night film at DocNYC is an atypical Ken Burns film about a gross miscarriage of justice that occurred when a jogger was found beaten and raped in Central Park and the police (and prosecutors) stopped looking for the real culprit, and most importantly at the evidence. They then railroaded five young men into prison by tricking them into confessing. It was a situation which was seen as completely fine by the largely white establishment who was terrified by the seeming endless cycle of violence being committed by young men of color.

The short version of the story is that on an April night in 1989 five teenage boys wandered into Central Park in order to get away from the projects and to hopefully stay out of trouble. They ended up hooking up with a group of about 25 other kids who were wandering the park picking on passersby. They were arrested when the police moved to stop the craziness. They were on the verge of being released when the police found the beaten jogger and detained them. The police then interviewed the boys and when they couldn't tell them anything, promised to send them home if they would fabricate a story and implicate their friends in what happened. For the police it was a slam dunk, for the boys it the better part of a decade behind bars.

The miscarriage of justice became apparent almost from the start, or would have if anyone was looking at the evidence since none of the boys' stories matched, the joggers time frame had her being attacked when the suspects were known to be elsewhere, and the DNA found in the jogger matched none of the boys… but it did match the East Side rapist who was terrorizing the area (Something no one realized for 15 years). Even most of the jurors never saw the errors because after all the boys confessed...

It’s a shocking horrible story that that was only corrected when the real rapist came forward to correct a wrong.

A solid film I’m kind of mixed on it. It tell the story of the tragic events, but until the final half hour it never completely catches fire.

The film is made up of new interviews with the five, their families, journalists, jurors and defense attorneys, as well as copious amounts of footage from the period. If you want to see New York City in the bad old days, see this film.

For me the problem with the film is that the film takes  so much  time laying out everything that when it gets up to the point where things begin to turn in the Five's favor it rushes to a conclusion. For a film that takes the point of view that not enough coverage was given to their acquittal, the film spends precious little time on it comparatively.

I'm guessing that much of the interesting parts of the acquittal story would involve what was happening within law enforcement- all of which declined to be part of the film. Partly I suspect because there are lawsuits still pending, and partly they are trying to cover their own asses and not look like even bigger jerks then they do already. I just wish they had raked more people over the coals in greater detail.

This is a frightening cautionary tale that deserves to be seen.
Posted by Steve Kopian at November 07, 2012