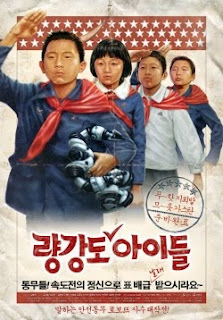 The next FREEE film at the Korean Cultural Service series in Tribeca has a full title of Ryang-kang-do: Merry Christmas, North!

I have next to no information on this film (the Cultural Service hasn't updated their website with details) but Korean Film Biz has the following description:

In Ryangkang-do, a rural area in North Korea, Jong-Soo's dream is to go to Pyongyang, where the Great General KIM lives. To go to Pyongyang, he has to collect and donate as many coppers as he can for the Great General to beat his other friends. But, he's rejected en route to Pyongyang and wanders the woods in grief. Weeping under a tree, he finds a balloon, hanging over his head. Within are Christmas gifts and a toy robot from Seoul, South Korea. The toy robot makes Jong-Soo popular, who was once an outcast. Town kids bring Jong-Soo foods and other necessities in order to see and touch the robot. While the robot becomes a way to collect gasoline for his younger brother to visit a hospital in Pyongyang, there happens to be some childen who want to take the robot from Jong-Soo.

Their full report on the film can be found here.

I'm going to try and get out and see the film on Tuesday. A full report will follow if I do make it.

As always Tribeca Cinemas is located at 54 Varick Street, on the corner of Canal Street.
FREE ADMISSION
All seating is first-come, first served. Doors open at 6:30pm. The movie is at 7
Posted by Steve Kopian at November 22, 2012