This weekend Puppets On Film is playing BAM 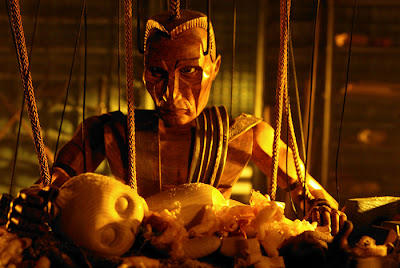 The Brooklyn Academy of Music is having a series of puppets on film this weekend. It’s a stellar collection of films that include Jurassic Park, The Never Ending Story, Muppets Take Manhattan and Labyrinth (two screenings both with and without a sing a long).

The series is also running two of the best films I’ve reviewed here at Unseen: Jodie Foster’s The Beaver with Mel Gibson. This little film is about a man who self-destructs and only manages to stay afloat thanks to a Beaver puppet. Not for kids or even most audiences, this blackly funny heart breaker has Mel Gibson’s greatest performance. It will rock your world.

Strings is a magical movie, one of the best fantasies you’ll ever see. This stunning film is about a kingdom of puppets who are very aware they have strings attached. It’s a story of power plays in the kingdom and romance and a few other things. I dare you not to be moved by the end.

Details on the series can be found here.
Posted by Steve Kopian at November 06, 2012