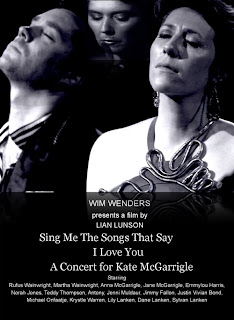 Sing Me the Songs... is an amazing soundtrack album containing stunning covers of Kate McGarrigle songs... it's also a terribly dull movie that only springs to cinematic life fleetingly.

I have to state very clearly I have no qualms about the music. The performances and the music are first rate and if the soundtrack is released I will gladly buy it. The trouble for me is that this is a very boring film cinematically.

Documenting the memorial concert staged by McGarrigle's children, Rufus and Martha Wainwright,the film is maudlin remembrance of the noted singer songwriter. As someone who only knew a few of the songs it's like watching a bunch of friends grieve for a family that was put together by people who knew and loved the films subject but can't manage to make it mean anything who didn't know her. The inside nature of the film is only intensified by the frequent additions of old photographs over the concert footage. I got no sense of McGarrigle or why her death was any sort of loss except to her family and friends.(This is like a personal shrine thrown open to the public with no explanation)

It doesn't help that many of the performances are filmed in simply point and shoot style. Yes I know the abilty to shoot at NYC's Town Hall can be daunting, on the other hand I've attended several concerts that were filmed there and they looked more exciting than this.

Occasionally the film springs magically to life when the music and the cinema come together such as Jimmy Fallon (yes really) goofs around,  Justin Vivian Bond singing the song that gives the film its title, the final song McGarrigle wrote (which closed the first half of the concert), several songs with Emmylou Harris and  a few others. Mostly though the film isn't a film it's just static footage.

I suspect that this was never really meant to be seen on a huge cinema screen. I say this because in watching some clips on You Tube I noticed that you don't notice that during many of the songs the singers are reading the lyrics off teleprompters.  I have no problem with people doing this since artists do it all the time, the problem is that seeing them on a big screen larger than life you're sudden aware of what they are looking at, which you're not in a concert hall.

My advice is skip the film and look for a soundtrack recording for you Ipod.