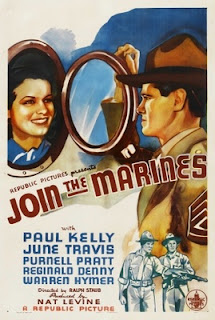 Charming romantic comedy action film about a woman who keeps wanting to get away from her strict Marine officer father. She tries to run away and marry Reginald Denny on an ocean liner, but she crashes into a New York cop on his way to the Olympics. Her plans are scuttled and she ends up romantically attached to the cop. The cop, his Olympic dreams shot down, ends up joining the Marines to please her father but quickly finds he's not Marine material when everyone s shipped off to a South Seas island where there is local strife and plague.

There is enough plot in this film for ten current Hollywood movies. Watching the film on DVD I was shocked that the film was coming to what seemed like a conclusion (I'm trained that Hollywood movies today only cover so much ground) when in fact it was just getting started. Moving a long at a brisk pace this film just movie like the wind from place to place, situation to situation and turns everything upside down as our hero's New York sensibility turns everything sideways.

I really liked this film a great deal. Its a super little film that hit me completely unexpectedly. Frankly I'm upset I hadn't watched it sooner so I could have shown it to several friends who like these sort of action comedies.
Posted by Steve Kopian at November 25, 2012