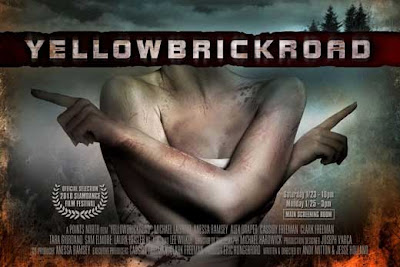 I recently saw the film Yellowbrickroad again on DVD. I had seen the film back in November of 2010 when in screened as part of the New York City Horror festival. At the time I loved the first two thirds of the film which created a terribly oppressive atmosphere. The film collapsed in the final third as the internal logic of the film imploded and the film became untethered.

After seeing the film I wondered how the film would play on home video for two reasons. First because much of the films power came from being trapped with it in the dark. Sitting in a theater you couldn’t escape it. At home you can just stop it (The film is playing on cable right now which forces stops and starts with commercials). The other second reason I was curious about the film was the films truly aggressive surround sound track. Seeing the film in the theater I quickly realized that until recently I had never seen a film that sonically was happening around me. It was scary. Would the fear it created carry over on a regular TV with no surround sound?

Before I talk about how the film plays on DVD I should probably tell you the plot. The film is set in New ENgland ,where in the early 40’s the whole town simply disappeared. They had somehow wandered off a mythical trail called the Yellowbrickroad. One man was eventually found and he simply spoke seeming nonsense (we see period footage retelling the tale as the film opens). As the film proper starts a group of modern day people return to the town and decide to set off on the same road. Things start okay, but it quickly deteriorates as the group quickly finds themselves lost. And then things get worse as some disappear and others become unhinged.

Watching the film on DVD I found that the opening credits/history was brilliantly done. It’s a perfect setting of mood and place and perfectly sets up the story. Then the film started and… well.. the film doesn’t hold up.

To be honest seeing the film again I quickly realized how little of the film doesn’t make sense. Seeing the film the first time when you don’t know what is going to happen next you hang in there more than when you know that the film is going to implode toward the end. Seeing it again I found that while there were a couple of instances where I picked up new things, but mostly I simply noticed how much was missing. There aren’t holes in the plot but chasms. Also watching the film again sans the surround sound I found that the film’s later portions weren’t all that interesting. Its simply just people wandering around in the wilderness. Yes it has moments, but mostly the complete lack of logic (internal) makes it more a laugher and something else you want to shrug off. What was a cool experience in the theater was a waste on an evening at home.

Unless you have a great sound system and big screen TV I'd take a pass, and I sure as hell would skip it if you catch one of the runs on one of the cable commercial stations.
Posted by Steve Kopian at November 28, 2012