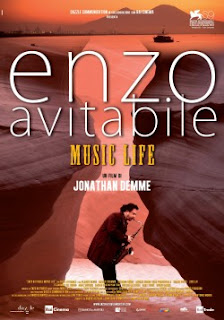 Jonathan Demme's portrait of the renowned composer and musician intercuts the man talking about his life with a gathering of musicians from around the world who sit around and play....

Avitabile a large man with curly hair, a days growth  of beard on his face and across for an earring  attacks his passion with a drive that is to be envied. Here's a man who feels who must write music and perform it. When his failing sight was returned after a cornea transplant he began to write music with an almost inhuman drive. He says he has an achieve of over 600 pieces of work over half of which have never been published. He's a man who loves his family and his city.  His love of music know knows bounds...

I just wish this movie could inspire that kind of passion, but it doesn't even come close.

In what is probably his least interesting and blandest film Jonathan Demme has give us a nice movie. I mean that with all of the connotations both good and bad associated with calling a movie nice. What I mean is that it’s a sweet easy film to watch. It has wonderful world music, an interesting central character and a friendly feel. The problem is that the portrait doesn’t build to anything. We watch as Enzo records with his friends, talks about his life, family and his music…but other than highlighting an excellent musician I don’t know what I’m being told this.

With truly great music docs like say Searching for Sugar Man or El Gusto the directors metaphorically grabs you at some point and makes you go OH SHIT I didn’t know about this person/group before? That never happens with this film. You watch you enjoy and then its on to the next thing. Never did I want to run out an buy his music. Frankly the film is so mellow I wanted to just curl up and go to sleep.

Don’t get me wrong it’s not a bad film, its just far from a great one, which is easy to see when you compare it to the great music films from this year

This film plays Saturday  the 10th at  the IFC Center
Posted by Steve Kopian at November 08, 2012