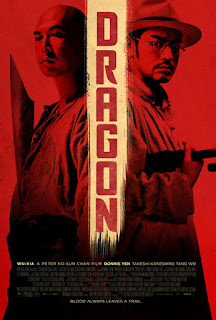 Donnie Yen’s Dragon opens tomorrow in select theaters. The film has been playing on VOD for a couple of weeks now, but if you can see it on the big screen you really should make the effort since it has some spectacular action scenes.

For those who don’t know Dragon is a slightly trimmed, retitled version of Wu Xia. This is a martial arts murder mystery that has Takeshi Kaneshiro coming to town to investigate the justifiable killing of a robber by Yen. As Kaneshiro investigates things don’t seem to add up and a dark back story is revealed.

We had extensive coverage of the film and Donnie's many appearances back in July when the film played the New York Asian Film Festival.

Here are links to our coverage of the film:
My review of Wu Xia (Dragon)
My Report on meeting Donnie Yen ( and see below)
Mr C on Wu Xia and Donnie's NYAFF award
Other Donnie Yen Coverage from NYAFF
Donnie Yen at the Secret Iron Monkey Screening
Mondocurry on Donnie Yen at SPL and on Lost Bladesman

As part of the coverage I got to spend a half an hour with Donnie Yen as part of a panel interview. I’m going to be lazy and link to the full interview over at Flixist. Good friend of Unseen Hubert Vigilla transcribed the interview and ran  it back in July and I can’t see the point of re-transcribing something I only asked one or two questions with. For those wanting to know my part in the interview here it is (With many thanks to Hubert):

Do you see a point where you give up action -- you were talking about comedies and stuff -- and say doing drama?

I wouldn't call it giving up. I would do non-action for just the sake of having the opportunity. I mean, not many action actors are being offered to play in non-action movies.

But just like watching you in Bodyguards and Assassins and Wu Xia...

The parts I remember are your scenes, you know, with your kids, not the fighting. One of the biggest parts in Bodyguards and Assassins is you breaking everybody's heart trying to do the right thing.

Well, maybe what I did in the last six years was working. [laughs]

So I was wondering if you [had thoughts about purely dramatic roles]?

You know, I would try, but at the end of the day, I don't forget the business model of making a movie. At the end of the day, you're talking about reaching out to as many people in the audience as possible. People come to see a Donnie Yen film, they want to see action. You know, I understand that, I accept it, I respect it. So, if I'm being offered to play a non-action movie, yes, I'd take the opportunity. Why not? I just finished a romantic movie, right? I get paid, I don't sweat. [laughs]

It was a good experience for me, right, but I will never forget my roots and will continue to make action movies.


For those wanting to read the whole thing click here.

If you haven’t seen Dragon and you like action films its definitely worth the effort to track it down. Actually if its playing near you you really should make an effort to see it in a theater since it’s a spectacular film with some of Donnie’s best action set pieces.
Posted by Steve Kopian at November 29, 2012