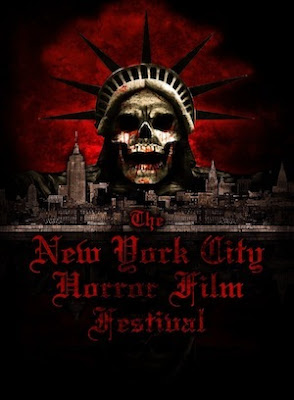 With the heavy coverage of DOCNYC, you probably thought we'd forgotten the New York City Horror Film Festival- well we didn't- after a one year hiatus the festival is back better than ever..

Wednesday is a meet up, but the movies start screening Thursday night down at the Tribeca Cinemas. Screenings run through the weekend  and include appearences by Rob Zombie and Wes Craven.

I need to tell you that the screening Saturday night of Scream will be preceeded by one of the best films of the year Foxes, which played Tribeca and rattled a good many peoples cages.

Advance tickets on sale until the 6th, which is tomorrow, election day, but additional tickets will be available at the door.

Details of what is playing when can be found here.

While we will not be providing the wall to wall coverage we did in 2010, we will be dropping in to some screenings so keep reading.
Posted by Steve Kopian at November 05, 2012

Email ThisBlogThis!Share to TwitterShare to FacebookShare to Pinterest
Labels: nychff 2012