Tuesday it's All for Love at the Free Korean Film Night

Next Tuesday is the next free film at the Tribeca Cinemas in the Korean Cultural Services (thankfully) never ending series. The Film is All for Love and it's the first in the It's Christmas in Korea series.

I'm not going to lie and tell you've I've seen the film. I haven't between Hurricane Sandy and the snow Wednesday I haven't had a chance. I believe I have a copy of the film in my collection, but I haven't had a chance to check (I have about 2500 Asian titles and since I buy them faster than I watch them I do forget what I have). If I can find my copy or see the film I'll post a report. 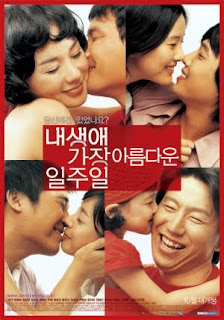 In this unofficial remake of the 2003 American holiday hit Love Actually, the week leading up to Christmas serves as a saccharine backdrop for several couples who have fallen in love, are about to fall in love, or are just now discovering that love simply wasn’t all they’d thought it would be. Charming and sweet, but with a decidedly contemplative note, All for Love hits on everything we’ve ever loved about the holidays – and each other, interweaving a series of stories into one heartwarming and thoughtful film that will stick with you forever.

The film will be shown in Korean with English subtitles.