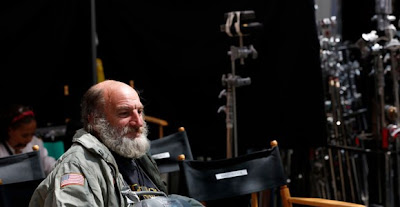 Portrait of New York and film icon Radioman. Everyone knows Radioman and he knows everyone (as you'll see thanks to the numerous celebrity interviews)

Radioman started life as a regular guy working for the post office but he started drinking and became homeless.He was named Radioman because he always had a radio around his neck. Stumbling on to the set of Bonfire of the Vanities he began a long running love affair with film and the people who make them. His love affair with movies helped him get straight and off the street.After hanging out on film sets he has managed to get small parts in well over 100 films.

Utterly charming portrait of a charming man who is a real character. He is very aware of being a character and he plays it up to the hilt.

I liked this film a great deal. Its a nice and sweet portrait of a sweet man. The trouble is that the film really is too long for what it is. While the film details the Radioman persona, it only deals a little bit with his life outside of that. We follow him around from set to set, see interviews with celebrities,  and get to know his background, but at a certain point the film stalls. The trip to California around the Oscars goes nowhere and seems to be little more than filler. I'm pretty sure you could chop out 15 or 20 minutes from this film and have a truly great film,as it is now you have an over long film that stalls for much of the second half.

Reservations aside this is definitely a  film to see especially if you love movies and want to know something about a character of a character actor you've seen in almost 200 recent movies.
Plays Friday at 745 at IFC and Thursday 15th at 11AM at IFC
Posted by Steve Kopian at November 08, 2012