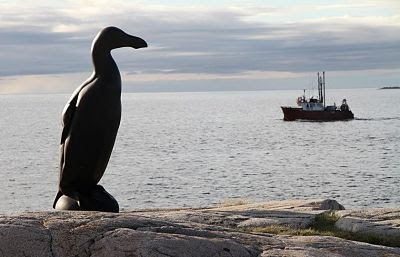 This is the story of artist Todd McGrain's efforts to place five statues he made to memorialize 5 species of birds that have gone extinct. His plan is to place the statues as close to the last known place where the birds were seen. The five species he has chosen to memorialize the passenger pigeon, The Carolina Parakeet, Labrador Duck,the great auk and the heath hen. The battle to get the statue for the heath hen forms the through line for the film as McGrain seems to be in constant conversation with Massachusetts authorities about it.

Moved by the book Hope is a Thing With Wings McGrain decided to make statues in order to get people to realize what was lost. All of the birds lost were lost because of human interaction, generally over hunting and habitat destruction. McGrain's hope is that we can stop the rapid decline of the various species.

As a film the story is a reasonably compelling one. It's the story of the artist and his friend as they go around and try to convince people place the statues. Its an interesting story that kind of is a bit one note as the conversations about the birds and especially the placements seem to repeat with slight variations (Where do you think the statue would look good?). It also doesn't help that McGrain is almost too nice a guy since even his disappointment doesn't move him much in the emotional register.

Where the film scores is in the beauty of the photography. This is a wonderful film to look at and I really wish I had seen it on the big screen instead of on TV on a screener. This is especially true of the final six or seven minutes where the music and the images of the statues in the landscape come together to form an over powering experience that probably would have had me tearing up had I seen this in a theater.

Worth seeing when it screens Tuesday the 13th at the IFC Center at 530.

Information on the project can be found at the Lost Bird Project website.

Addendum: This was one of the first films I saw for the Festival and it's one of the films that has still stayed witth me these past two plus weeks where others have faded. If you can go, do so
Posted by Steve Kopian at November 05, 2012