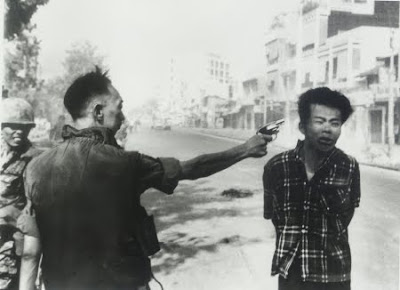 My final night at the DOC NYC Film Festival was less film and more discussion. It was also one of the best and most thought provoking nights at the cinema all year.

The evening consisted of a short film called Saigon '68 which looks into the the iconic photograph, see above, that was taken during the Tet Offensive. The film, which had only been finished a day or two before, was made as a kind of trailer or show reel for a longer film on Adams, talks about Adams and then gives the back story concerning the photograph.

The photo, which galvanized many people shows General Loan shooting a prisoner, Nguyễn Văn Lém, on a street in Saigon. Without the back story, and even with it, it is a brutal act showing one man ending another's life. One would think that the dead man was innocent, the truth is another matter. The dead man was a known assassin who was caught in the act of disposing of 30 of his victims. He had earlier killed the family of one of the Generals very good friends. He was operating in a combat zone, in civilian clothes which made him immune to the rules of war. It was even by US standards okay to execute him. Ultimately the dead man was a bad man, as one person on the panel said, he was comparable to Osama bin Laden.

That's the simple version of the story, the full story of all of the parties is even more complex. And its a complexity that was given full reign in the film.

The heart of the evening was an hour plus long discussion of the film, the photograph and history.

The discussion began right at the top when Thom Powers had all of the panelists Hal Buell, former AP photographer and editor; Walter Anderson, former Parade magazine editor; Richard Pyle, former AP photographer; Bill Epperidge, former Life photographer; James S Robbins, author "This Time We Win: Revisiting the Tet Offensive"; and the director Douglas Sloan, come to the stage to discuss photographer Eddie Adams. Each man talked a bit about their own background and their relationship with Adams, whom they all knew except Robbins, who was well versed on him having written an account of the Tet Offensive where Eddie figured prominently.

After the intros the film was shown before the guys were brought back on stage.

The discussion was incredible. I had thought that the film was going to be the listed 75 minutes so I didn’t bring my camera, figuring that the 10 or 15 minute discussion would be recorded and placed on the Internet. Sadly there was no recording so all that is left to record this monumental gathering of minds is my spotty notes and any memories of any one who was there. I’m going to try and relate what happened but you’ll forgive me when I don’t attribute who said what since I didn’t take complete notes (I was too busy listening and learning). Also keep in mind the order will also not be exactly as it happened rather as I remember it, or in the order I remembered it.

I believe the discussion began with one of the men relating how the first time he met Eddie was when the Beatles came to New York. He was assigned to try and get shots that no one else would and found Eddie in the same place. (In his diary Eddie commented that he considered letting the air out of the Beatles tires so that the fans would have time to break down the barrier and get to them) He then didn’t see Eddie for another year or so when he wandered into a brothel in Viet Nam and met Eddie there. The brothel had been bought out by the Air Force to be used as a press center.

The discussion shifted to how photos have more power than video. With photos the image is frozen in time and you can look at all of the details. With film the images, in the words of one panelist, go in one eye and out the other. To everyone on the panel photos are more powerful.

Will photos have a place without newspapers and magazines? Yes, they said, it will move to the Internet. They felt that there will always be a place for photos, however with the proliferation of everyone’s photos the truly great photos may get lost in the visual noise. (There was also the feeling that the mass population of photographers are no replacement for the trained photojournalist)

Most of the discussion centered on the context of the photo. Director Douglas Sloan asked everyone knowing the story behind the photo does that change how we see the picture. I think it did for most people.

He then asked knowing the background of the people involved, had we been the one with the option to shoot would we have executed the prisoner? I and just under half of the audience said we would. I think this kind of shocked some people, but context is everything and it’s one thing to be safe in a theater in NYC and another to be in a city and country under siege. As one of the panel said the execution is kind of like what happened to Osama bin Laden, and most people seem okay with that.

There was much discussion of Eddie’s feeling toward the picture. Eddie respected the General and kind of regretted taking the picture because it caused him so much trouble (Loan was hounded and branded a war criminal by some even though technically what he did was NOT a war crime). While Eddie didn’t condone what he did he did understand why he did it. Besides Eddie didn’t have any politics, he was there only to take pictures. (Everyone was pretty sure that had he known the impact of the photo in advance Eddie still would have taken it.) Eddie really didn’t want to talk about the photo and would not use it in a collection of his photos. (In the film actor Danny Burstein does quote Eddie talking about the shot)

There was a discussion of the cut throat nature of the photo game and how everyone fought to get the good stuff. Where movies were concerned there was a delay in it getting out since any film had to be flown to Tokyo for processing. The need for speed was such that NBC used a Grand Prix motorcycle rider to get the films to and from the lab.

The decision to use photos was discussed. Every photo used was always debated, even one such as this. Everyone knew it would go out, but it was still debated as a matter of formality. They said that once the photo went into the AP offices in New York the photo was looked at and then sent down the wire within an hour or so. Because of the lag time the explanation of the photo only followed a day later (the movie footage was released several days later and was heavily censored by TV networks)

As time was running out the floor was opened for discussion with the audience. It was an interesting event that resulted in a couple impassioned statements/questions.

One man railed about how it was not okay to execute anyone under any circumstances. He said that Americans should not behave like that. It was pointed out that this was not something that American troops did only something Americans witnessed. (You’ll forgive me I don’t fully remember everything he said). There was a discussion of the US policy that American troops are not to execute prisoners unless there is an absolutely good reason. An account of US troops killing Korean prisoners was related saying that the troops were evacuating and that had they let the prisoners go or left them they would have frozen to death before they could get anywhere.

Later another man, and forgive me for editorializing, who has spent way too long in academia and dealing with the intelligentsia in an ivory tower, asked two questions. The first asked in a condescending manner wondered if we really knew the man executed was bad guy and how? James Robbins, the author of the book on Tet, looked more than a little annoyed with the question and the tone since it was clearly something a person who was not paying attention would ask. He replied off handedly that we knew he as bad because he was caught with 30 bodies, we could track his deeds through pay and other records, past run ins with the man and because his widow said so.

The second question, equally disconnected to reality, he asked about whether Eddie, or any of the photographers ever wondered about the later contextualizing or use of the photos after they took them (Actually it was an incredibly long question full of large words and signified nothing unless you were an academic with no real world experience) . Everyone on the panel basically said you just take the picture,  you react and act you don’t think. There was never a thought about anything other than just capturing the moment.

At some point someone asked about other photographs particularly about one of Jane Fonda in tank. After one of the men quoted an American officer as saying “I wouldn’t cross the street to watch Jane Fonda hang herself” , at that point  the director seized control of the discussion and forced it back on track.

The panelists then discussed how at the same time as this picture appeared the picture of  South Vietnamese soldier carrying his dead daughter from his house was also released. Several places ran the two photos in tandem. The family of the soldier had been killed by an assassin of the sort that the executed Nguyễn Văn Lém was, operating off death lists and killing everyone they found at any target home.

The talk ended not long after that , however I do want to mention that there were two other comments worth noting.

There was also much discussion about ending the war and wars. No one on the panel really believed that the photo ended the war, since it was pointed out,  that US involvement lasted longer after it was taken then before.

They commented that ending any war will depend upon how much "skin" the average American would have to give up. With the draft in effect everyone had "skin" in the pot and it helped to end things. Today there is limited exposure and as such the wars drag on. If there was a draft things would be different.

And with that the discussion ended and we were hustled out.

To me it was one of the best and most thought provoking nights at the movies and a perfect way to close out DOC NYC. Honestly I don't think it could have been topped.
Posted by Steve Kopian at November 15, 2012

Email ThisBlogThis!Share to TwitterShare to FacebookShare to Pinterest
Labels: DOCNYC 2012, documentary, history, not a movie, war