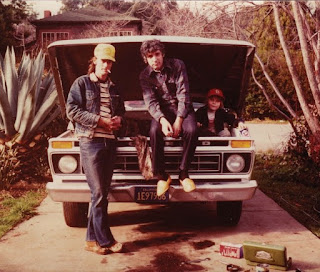 DBBORROUGHS was supposed to see this film during the previews of DOC NYC , but through a twist of fate and a switcheroo in the programming, I got to see 2 movies that I didn't intend on seeing. One of those films was FAR OUT ISN'T FAR ENOUGH: THE TOMI UNGERER STORY.  You should totally see that documentary!  The other one of those films is this excellent documentary by Treva Wurmfeld titled SHEPARD & DARK.  The film follows the complex and unlikely friendship between Pulitzer Prize-winning playwright/actor Sam Shepard and close friend for nearly 50 years, Johnny Dark, a present day homebody, amateur archivist who works odd jobs and has a penchant for writing and getting stoned.

The two men met by chance in the 1960's in The Greenwich Village in NYC after a play that Shepard had written. Dark was curious to know what drugs Shepard was on while writing the play and they bond over stories about their fathers and common love for writing.  The kindred spirits marry into the same family and live communally for many years until Shepard leaves, abandoning his wife and twelve year old son for a famous Hollywood actress.  Despite the seismic shift in their relationship, Shepard and Dark remained close and correspond through letters and photographs.

The friendship gets put to the test after they decide to publish their letters and are presented the daunting task of sorting through endless pages of letters and photos while reliving and confronting the past.

The film is fun to watch because the director Wurmfeld has great subject matter to work with.  Shepard speaks with a charming midwestern twang and despite his fame, lives like a cowboy with an old fashioned attitude toward women while struggling with the balance between solitude and companionship.  Dark is a likeable character because he is genuine. He enjoys the writings of Kerouac and The Beat Generation, the companionship of his dogs and getting high on marijuana.  Go see this film about a truly odd couple! It is a film that sheds light on the imperfections of humanity and friendship with an excellent Bob Dylan soundtrack to boot!