New Romanian Cinema comes to New York and makes waves BEST INTENTIONS, 3 DAYS TILL CHRISTMAS and EVERYBODY IN OUR FAMILY

Lincoln Center's Romanian film series MAKING WAVES NEW ROMANIAN CINEMA opens Thursday and it's got some interesting films kicking around. I attended a couple of films last year and was impressed by the atypical, at least by Hollywood standards, way of telling a story so when they announced the series this year I decided to dive in.

I managed to see three films at press screening and  I'd like to tell you about  them now... 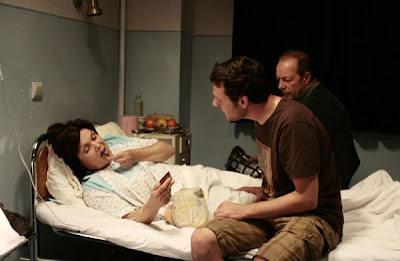 BEST INTENTIONS
Weakest of the three films I saw concerns a young man who gets the call that his mother has had what is believed to be a stroke. Packing a bag he rushes to the hospital where he finds his mother is recovering. Over the next four days he'll try to find out if his mother really is okay (she seems to have recovered) and whether or not she should be moved to a big city hospital.

A slice of life film where not a whole hell of alot happens, this is exactly precisely like watching what happens when you get the call that one of your parents has gone into the hospital. I say that it's exactly like it because I've gone through it with both my mom and my dad. The trouble is thats all it is. there is no grand revelation, no tragic turn, it's simply the course of a couple of days. I figured that when the film ended I would find some great revelation, nope. It's not bad but I don't have a clue as to why I'm being told this. However I can accept that it is just a slice of life.

The real problem with the film is how it's shot. Every shot, except the opening and closing sequences, are from some persons point of view. We watch the action from some character in the action. People walking in the hall of the hospital provide a vantage point, people in the other hospital beds (which requires a weird arrangement of beds) , people across a table or even someone in a train car. Nothing is seen that isn't seen by some on screen character. It's a clever idea for ten minutes bt then it gets tired fast. Actually by the time the film ends you're wondering who is witnessing the opening and closing sequences because our hero is all alone in his apartment. (Hubert Vigillia of Fliixist speculates, and I agree, that the scene is witnessed by a cat with a jet pack because there is some slight motion in the camera)

In writing the film up I did some reading on the film which talked about what the film is trying to do, about how the perspective of the film is supposed to highlight how everyone looks to Alex to do something but he never does and the notions of best intentions, but  quite frankly until I was told what the point of it all was I never saw it. Chaulk the film up to being a failure since the filmmaker has to explain it all for us. 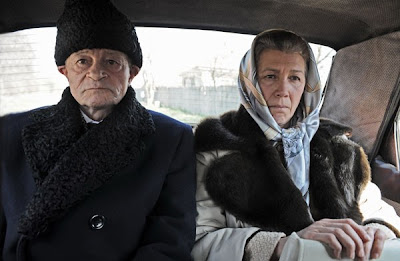 3 DAYS TIL CHRISTMAS
The retelling of the final days of Nicholas Ceaușescu the leader of Romania from the moment he decides to flee the mobs 3 days before Christmas 1989.

Told via news footage, interviews and reconstruction the film is tense retelling of the final days of a tyrant. Yes you may know what happened but at the same time the film creates a genuine sense of suspense as you wait for the inevitable to happen.

This is riveting filmmaking...with an expected political statement at the end about what the revolution really brought. This is a fine example of how to blend documentary and recreation to make a film that keeps you riveted to your seat.

This is the best of the three films I saw so far and it's highly recommended. 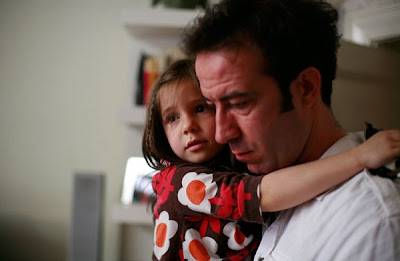 EVERYBODY IN OUR FAMILY
Amazingly acted across the board (if there was an ensamble Oscar this would be in contention) this little slice of domestic discord flip flops all over the place and ends up keeping you off balance.

The film concerns Marius, a self centered bore,  who goes to pick up his daughter for a two day holiday out at the sea shore. Stopping off to see his dad and borrow his car, he instantly gets into a fight since its clear his dad doesn't approve of how he handled his divorce and, its implied, his lack of time with his granddaughter.

Arriving at his ex's home he's told that his daughter can't go because she's sick. Marius won't hear of it and begins to steer things so he can take the girl.  Circumstances begin to turn from dramatic to slightly uncomfotably comedic to frightening and by the time the police are called you won't know where this is going....probably not where you expect it to.(some of this will make you shift nervously in your seat)

By turns dramatic, funny, uncomfortable, down right scary and back again, this film's final hour or so had me unsure of where this was going or whether I wanted to be laughing at this or not. Some of this is dark, (some people walked out) but at the same time it's so absurd as to be funny. And when I say funny, I don't mean jokes and gags, I mean it's funny in the realistic way that people do some incredibly stupid things. Some of what happens runs kind of close to some of the stories I've heard from attorneys at the day job in the court system.

When the film ended and I walked out of the theater I was a bit disturbed, kind of rattled and unsure of what I just witnessed. I wanted to talk to some one about it becaue I was kind of ... off. While the film doesn't end horrifically, it's shifts in tones and it's unexpected ending left me off balance. To be certain I had seen a film like no other, but at the same time I didn't know what to really think. I'm still pondering it and whether I want to dive back in again when the film runs in a couple of days. My uncertainty about a repeat viewing aside I highly recommend this to anyone who wants to see a film that isn't remotely Hollywood.

I should also mention that the very good documentary Turn the Lights Off which played at Tribeca and which I promised to review fully is also playing.  While I never wrote it up fully, my thoughts can be found here.
Posted by Steve Kopian at November 27, 2012