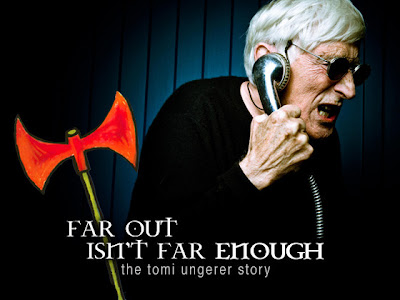 Put this dark horse film on the short list for the Academy Awards and more importantly on my list of my favorite films of the year.

I was twisted...er fell in love with Tomi Ungerer's art and style of writing children's books at an early age when my aunt gave me I Am Papa Snap and These Are My Favorite No-such Stories. Short snippets that begin and end nowhere and are incredibly profound I was hooked. Its a book that shaped how I write and think and feel about stories of all sorts.

The two things that I love about the film is that first it has Ungerer telling his own story. Sure we get people like Maurice Sendak talking about Ungerer, but mostly we get the man himself telling us everything we ever wanted to know about himself and his work. When you have such a great communicator such us Ungerer you don't need anything else...

...but you do get more, which is the second thing I love about the film which is all of Ungerer's illustrations and art work not only shown to us, but brought magically and marvelously to life. Even if every other thing in this films sucked, which it doesn't, the art work alone would be worth the price of admission, or many admissions just to see it come to life.

I love this film. It is simply put one of the best films of the year and one of my most favorite, As Chocko said to me after he saw it "This may end up battling it out for the top spot at the Unseen Films Best Film of the year list". Yes it will

If you want to know how much I love this film consider that I watched the film three times in a row when I was loaned a screener for 24 hours.

A MUST SEE film