A non-review of Wonder Women: The Untold Stories of American Superheroines (2012) — DOCNYC 2012 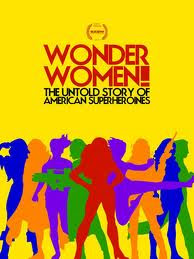 The history and influence of super heroine Wonder Woman in comics, movies and real life.

I'm really not one to be able to review the film. This look at the influence of the longest lasting female superhero really wasn't my cup of tea. Part of the problem is that the film is too short at 62 minutes to quite link up everything that it wants to do. The other problem is the film is so firmly entrenched in a feminist perspective that looking at it objectively is rather hard to do.  Somewhere in the second half when the film discusses how many female heroes tend to die and they show sequences from one of X-Men films, I kind of bowed out. The trouble being that it was clear that way they were viewing it only really works from a certain perspective that requires the dismissal factors (and history) that don't fit. It was then that I realized that much of the film was like that and I couldn't accept the narrow view point.

Yes the film does layout the history of strong women nicely, but for me much of the film requires point of view I neither have, nor wholly accept (owing to what it leaves out).

If you are looking for a history of strong women characters see the film when it plays Tuesday at DOCNYC or you can wait for it to run on PBS when it plays as part of Independent Lens in April.

(I will say that the film does get deeply moving at the end when various women talk about their heroes.)