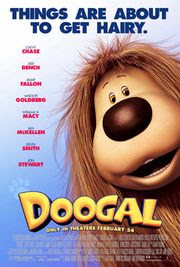 Let me make this simple:This film should be avoided.

Go find the original version of this film called The Magic Roundabout that has a great collection of English actors doing voices. Here they've changed it all around so that its a bunch of American actors pretend to act for a pay check.

Its awful. Really it is, the difference is like night and day. This is just a good little film ruined by attempts to making it acceptable for American audiences. I have the original version and it's a damn fine animated film by any standard. This re-working is just plain bad.

Not only were the voices changed but  the script was reworded so that it was hip and happening and now. A few changes work but  you know you're in trouble  when you consider that they gave a voice to the moose, who's lips never move and never spoke in the original version. I know I've always wanted to hear Kevin Smith say with almost no emotion "oh look Blue Man Group is in town".

One of the worst films of 2006 or any year. (which is not the case of the original version)

For those who are curious (the vague, off the top of my head so I could have this wrong ) the history of  The Magic Roundabout is that it started life as a French TV series which was dubbed into English rather randomly, I believe, because the people involved didn't speak French. The series was a big hit and spawned a movie back in the 1960's which is quite good (It's out in the UK with both the original French versions and the English) I think the show went on for a long time in various incarnations before this movie- in it's original form, was done as a restart/throw back.
Posted by Steve Kopian at November 23, 2012

Email ThisBlogThis!Share to TwitterShare to FacebookShare to Pinterest
Labels: animation, not worth the effort