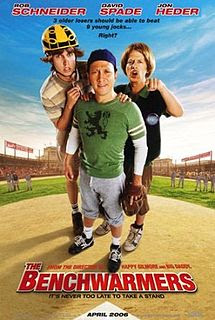 Critically reviled, but making money at the box office this little movie made made up headlines when it was announced that it would not be screened for critics, only to have a critic be invited to an advance screening.

This is the story of three adult loser who take on a series of little league teams to prove that nerds can be cool.

You know coming from Happy Madison productions (Adam Sandler's company) this is probably going to be low brow- and it is with tons of scatological jokes for the lowest common denominator. Its really a base movie...its also strangely a movie that's not as vile as you think it should be. It is at times very funny.It also gives Rob Schnieder and David Spade a chance to prove they can do more than the same old shtick.

However its not a good movie. Its almost a good movie. The problem with this film is that they went for too much silly. Spade's hair, some of the behavior- Jon Heder's constant booger eating for example and the need to twist things to the gross make this movie go from what could have been a genuinely funny and heartwarming movie to an occasionally funny missed opportunity. There are great portions of this that work (which are the reason I'm recommending the film), and would have probably worked better had they played it straighter. Granted the idea at the center- adults beating kids on the baseball field - is a bit bizarre, but I think that if they had just set it ten degrees from normal like say Dodgeball- then this would have been a classic of stupid heart warming cinema. (Now it's a solidly okay one)

I liked a good deal of it. I disliked the fact it didn't come together better. Its worth a shot on cable or a rental. Though be warned if you don't like the other Happy Madison films stay away.
Posted by Steve Kopian at November 12, 2012