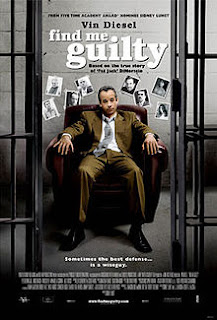 This is the story of Giacomo "Jackie Dee" DiNorscio, who found himself facing charges under the various Federal conspiracy laws along with 21 other defendants and decided to defend himself. Jackie's lack of court room experience turns the whole trial on its head.

Sydney Lumet strikes again. Once more the master of cinema is stalking the halls of justice in order to tell us a very compelling legal story. Its a great story that's masterfully told (for the most part) and shows us what happens when a regular guy takes his own destiny in his hands.

Vin Diesel is excellent as DiNorscio. We care for him in ways we probably shouldn't and root for him even though we really do know he's not a nice guy. Equally as good as Diesel is Peter Dinklage who plays one of the attorneys who is at first annoyed by what DiNorscio does in court and then amazed as he realizes that he actually is scoring points with his unorthodox unschooled style. While these two stand out the rest of the cast is pretty much note perfect as well.

The movies one problem is that its too short. This is a movie that essentially compresses three years of events into two hours and a good deal of material is cut out. Don't get me wrong there is no problems following the course of events, nor is there any problem with becoming emotionally invested in what happens, the problem is that there are way too many characters, some of which, like the prosecutors, who are given the short end of the stick. In the case of the prosecutors I had the sense that there was more to them and what they went through. As it stands now they are simply a chorus that shows up from time to time to set something in motion, they aren't real characters. At other times I had no idea which defendant or witness they were talking about since I couldn't keep who was who straight. Its not fatal to the film, but you get the feeling that this should be an hour or two longer since the film seems to bleed off the screen and into a real place.

Definitely worth seeing, as pretty much any film that Sydney Lumet is worth seeing.
Posted by Steve Kopian at November 13, 2012