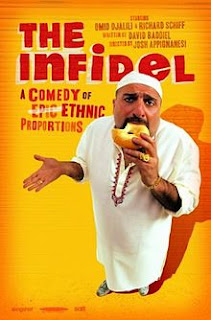 Omid Djalili stars as Muslim who finds out that he was actually born Jewish. This creates an identity crisis that under normal circumstances would have been bad enough, but is compounded by the arrival of a radical cleric who is set to join his family.

Amusing comedy that I first saw as part of the Tribeca Film Festival On Demand service. This is a rather low key film with most of the jokes coming not from set ups and punchlines, rather from the interaction of the characters. This is not the raucous comedy of some of the recent big budget films, rather it's something smaller, a human sized comedy of regular people.

It made me laugh and chuckle and it distracted me for a couple of hours. However as you can tell from my lack of raging enthusiasm in either a good or bad direction is didn't make a huge impression on me, at least the first time I saw it. However in the years since then I've seen the film a couple more times and I find that I enjoy the film more with each screening. To be honest I still haven't put the film on by choice, however I find that each time I run across it on cable I stop and watch it.

Definitely worth seeing, it will amuse you, and I do look forward to seeing it again myself.
Posted by Steve Kopian at November 14, 2012