Greenwich Village: the Music That Defined a Generation (2012) DOCNYC 2012 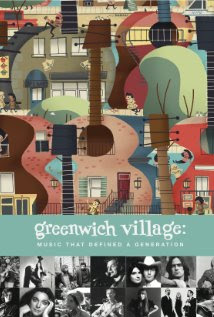 Mr C tried to get a ticket to see this film but was told that the film was sold out. Considering that at least half the people in the theater knew the producer or were connected to the film it's not surprising. Then again  it helped provide the film with a favorable response, which sadly I can't give it.

The film is supposed to be a look at Greenwich Village in Manhattan and the music scene that developed there after the Second World War and gave birth to people Like Bob Dylan, Kris Kristofferson, Peter Paul and Mary and others. In reality it's some incredible music clips interspersed with talking heads from a large swath of people who were there from the 50's through the 70's, none of it organized in any sort of way that tells you anything meaningful except as a random story.

Who put this together? More importantly who allowed it to be released?

The only thing I can think is that everyone connected to the film is so close to it that they couldn't see that there is no sense of place -The Village is some place around Washington Square Park but you know nothing else. There is no sense of time- The film goes from the Civil Rights Movement to VietNam and then snaps back to cover the black lists in Th mid 1950's. Memories and feelings bombard you in a random fashion to the point little of it means anything unless you lived through it, and even then I would be hard pressed to say it added up to much of anything.

This is a five minute segment on a TV history stretched to 90 minutes... no it's fragments of a real documentary waiting to be put together. The pieces are all good there is nothing to connect them. My idea scribbled into my notes would have been to take the late great radio DJ Pete Fornatele who appears in the film and have him do the narration and link everything. (The Susan Sarandon reading of Suze Rotolo's autobiography doesn't work and diffuses things further)

My over riding thought when watching the film was simply to pull the film apart and try to figure out how I would have done it.

I would skip it unless you are of the time or until the unlikely event of a re-edit comes along.

The film when screened had technical problems with the digital projection and the screening was stopped for a while. During the break one of the producers regaled the crowd with stories- would someone please make a movie about this man because he was absolutely entertaining.

IMDB lists the running time of the film as 121 minutes. The version screened at DOC NYC was about 90 minutes. If there is a longer cut of the film with an additional 30 mintes it's entirely possible that the film will play better. If that is the case I reserve the right to re-review the film.