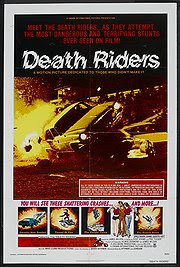 Summer on the road with The Death Riders, a group of motorcycle and car daredevils. The group is made up of guys in their late teens and early twenties. They travel around in vans and cars going from state fair to state fair and race track to race track. They jump motorcycles, jump and crash cars, drive through burning tunnels, blow themselves up with dynamite and do assorted other stunts.

This is an interesting look at a brand of entertainment thats pretty much gone the way of the wind. Not so long ago automotive thrill shows used to criss cross the US doing wild stunts and providing an evening or afternoons entertainment, usually in conjunction to the state fair or as part of an evenings program of races. But as safety and insurance concerns grew and the places where you could put on these type of shows diminished they disappeared or changed into something else. If you've ever wanted an idea of what it was like to barnstorm the country this film will give you some idea.

To be honest time has not been kind to this film. The one or two camera set ups used often miss a great deal, one crash in the hometown of one of the Riders is not caught on film because the camera was covering the crowd, in particular the grandmother of the one who crashed. We watch as she becomes so upset paramedics have to be called in. At other times the night time filming obscures a good deal of the action. Its as if the film makers were learning on the job, which is okay, because things do improve, however it makes some of the early part of this film slow going. There are other problems, the Riders tend to blend together and the music, while good, never allows for any excitement to creep into the proceedings.

Still this is an interesting time capsule of days "long" gone. Anyone interested in racing or motor sports will get a good look at how safety has changed over the years, and how there really was no safe distance between the track and the crowd.The safety equipment for the riders is non-existent. Many of the stunts, such as the people jump, will probably not be done again with such a care free attitude. Its amazing how times have changed.

No, this is not a great film, its probably only barely a good one. Certainly if you're looking for just spills and chills and stunts its very disappointing, however if you can accept that this is a time capsule of days gone by, made by guys who had nothing even remotely high tech or flashy, then you will probably enjoy yourself for the hour and a half or so that the film runs.
Posted by Steve Kopian at November 29, 2012