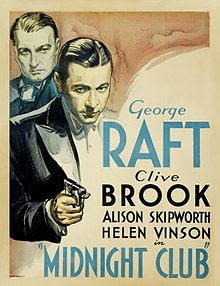 Pure fun Hollywood hokum has a Scotland Yard inspector going after a band of jewel thieves operating out of the titled establishment. They manage to operate in plain sight thanks to the use of doubles and lots of secret doors. Into the mix comes a tough American (george Raft) who is running his own game and it isn't long before everything becomes complicated especially when Raft and one of the thieves begin to be more than attracted to each other.

Breazy little crime drama is of the sort that is completely unbelievavble and utterly enjoyable as the characters go through their paces in a manner that only hollywood could devise. I mean seriously could you really have a night club so filled with secret doors as the Midnight Club? How about the idea of using doubles to fool the police? I'm not saying any of it is bad, only that this is really just pure entertainment.

For me one of the joys is watching a young George Raft go through his paces. Until recently I really hadn't seen many early films with Raft, rather I saw him later in his career when he was playing either himself of a stereotypical gangster. I'm sure it paid the bills, but it never gave a clue as to why he was a star. Watching Raft in Midnight Club you get an idea, as he is a man of action, a man in love and guy way ahead of everyone else much to the consternation of the baad guys, and the smiles of the audience. (You also really see how good looking he was)

Definitely worth seeing should this hit Turner Classic movies.
Posted by Steve Kopian at December 13, 2012