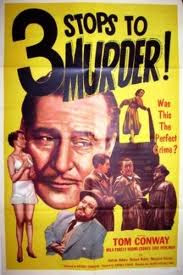 I was given a copy of this film that was marked Three Steps to Murder, the actual title is Three Stops to Murder, I think Three Steps is a better title, especially since two murders occur when people fall down a flight of stairs.

A decidedly minor, but enjoyable, mystery has actor Tom Conway playing a detective named Tom Conway. Hired by a jeweler to find out what happened to some stolen jewels, he is suddenly thrown off the case when the jeweler has a change of heart. Suspecting that something is up he remains on the case and runs smack dab into much more centering around a custom dress shop.

A film that has a sense of being thrown together on a whim, the film seems more to be a draft than a full-fledged mystery/noir. The film remains interesting because Tom Conway is interesting. Sure he seems to have been walking through the role in a trench coat that he only removes once or twice in the entire 75 minutes, but he is charming and seems to be having a good enough time that it carries over to the audience.

As diverting as the film is the film is mostly of interest for fans of Hammer Studios. Here is a fine example of what Hammer was turning out before they turned to horror. I also think that bits of the film were filled at the Bray offices, I could be wrong, but some of it looks like some of the shots I had seen in a documentary on the studio.

Worth seeing if you run across it but I wouldn’t go out of my way to see it unless you are a Hammer completeist.
Posted by Steve Kopian at December 11, 2012