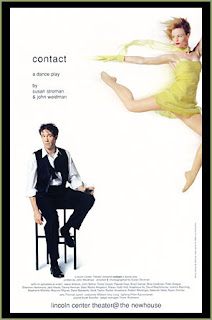 If you want to see me go stupidly gaga show me Susan Strohman’s Contact.

This started life as an Off Broadway show at Lincoln Center’s Mitzi Newhouse theater. It's a three part dance play, the first concerns two men and a woman on a swing. It’s based on the painting by Fragonard called The Swing. It’a brief but amusing trifle. The second story concerns a woman and her husband at an Italian restaurant in the 1950’s. She’s unhappy, and as the night wears on she drifts on she imagines killing her husband and running off with a waiter. It’s a bittersweet tale of an unhappy marriage. The third and longest story concerns an advertising exec who decides to kill himself on the biggest night of his life, only to fail and end up at a bar/dance club where he falls in love with a woman in a yellow dress.

It was a feeling many people shared and after it’s scheduled run at the Newhouse it moved upstairs to the Vivian Beaumont where it won a Tony for Best Musical and ran for years.

As the run ended PBS made a deal to run the show. It ran live, then was repeated a couple of times before it disappeared into the void...

... or would have had I not recorded the show. The only thing I can say is I will pull it our periodically when I need a lift.

As with most of the Live From Lincoln Center Broadcasts the shows are officially in the void and may never be repeated...however if the gods ever smile and they do decide to run contact again I suggest you make every effort to see it.
Posted by Steve Kopian at December 26, 2012