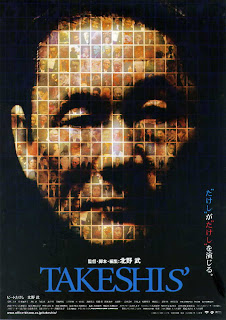 This week of films from Asia  begins with one my favorite Takashi Kitano films Taleshis' I have been trying to write up this film for Unseen since I started it but have been unable to do it justice. To that end I'm going to repost a piece I wrote in either 2005 or 2006 right after I just saw the  film.  The film is a supreme mind scrambler and a work of a true genius.

I should also point out that the film is the first part of a thematic trilogy that continues in Glory to The Filmmakers and Achilles and the Tortoise. neither of which I apparently reviewed here at Unseen (I'll fix that soon). The trilogy is about fame and creation and a few other things and are must sees for anyone who wants real meat in their movies. Seriously you can not dismiss them even if they frequently seem like a joke.

If you want your mind blown start here and then move on to the other films...

I love to attempt the impossible, at least when it comes to movies. Trying to explain Takeshi Kitano's Takeshis' is one of those times.
Let me start by what I do know.

Its flawed.Then again I don't know that, so strike that let me try again.(I reserve the right to decide that after I see it again)

Its confusing. Yes it is, anytime you try to put what maybe going on in someones mind its potentially going to confuse your audience.(or put one over on them)

Its demanding. Yes it is. There is a great deal going on and there are constant references to Kitano's other films.

Its probably one of the best films of the year. Though don't take that as a sign you should run out and see it, this is going to be one of those movies that divides those who see it with a good number finding it to be self indulgent (yup) pretentious twaddle (yup) made by someone thumbing his nose at his audience (I wouldn't go that far)

Let me put it this way. I have no idea what I really think of this movie other than I'm reasonably certain its a great movie, but I'm not sure if I like it or anything else.

The plot of the movie is best described as the story of two men named Takeshi. One is the mega star who made this movie and who is finishing up his latest movie. The other is a man who looks exactly like the star, but with blonde hair who is a struggling actor trying to get a part. The movie unfolds in many ways like Fellini's "8 1/2", however Takeshi goes off in different directions, often self referential. He also crosses and recrosses the lines of and obliterates any notion of what is real and what isn't. I'm not sure whats what and probably never will.

One review I read of this movie quoted Takeshi as saying he wanted to make a movie that people were not going to get right away and that they would have to think about after the film finishes rolling. he has done that in spades, I don't know how anyone can not think about this movie even if they don't like it. Its the sort of thing that demands it, even when you're trying to explain why you don't like it.

In many ways this is the same as being trapped in the directors head as he ponders his life, the nature of celebrity, fans and the images we see on screen. It could be the ultimate autobiography in the sense that we are allowed to see how Takeshi sees his life on screen instead of on the page. Its the ultimate answer to the question "what were you thinking when..."

I think the reference to "Getting Any" is appropriate since that film, a departure from his "normal" at that time action films and is said by some to have been the most personal of his films up to that point. This film seems to parallel it in the story of the loser, blonde Takeshi trying to make something happen. The film also is very close humor wise (though not as scatological). It makes for very surreal viewing.

And while this is often a very funny movie, its also incredibly sad. Blonde Takeshi breaks your heart simply by standing mute. His posture and facial expression are heartbreaking. There is a moment early on after a shoot out where we see Takeshi standing victorious while his posture tells us the victory is meaningless. Its utterly heartbreaking.

I am explaining this badly because there is no clear way to explain the movie short of seeing it. trying to put into words what happens will either ruin it, not do it justice or confuse the matter. Its something you have to experience.

....I just refuse to take any responsibility concerning what you'll think or feel about it when its done.
Because this movie makes you both think and feel I have to say this is a great movie...but even I don't know what exactly I feel or think beyond that.
Posted by Steve Kopian at December 03, 2012